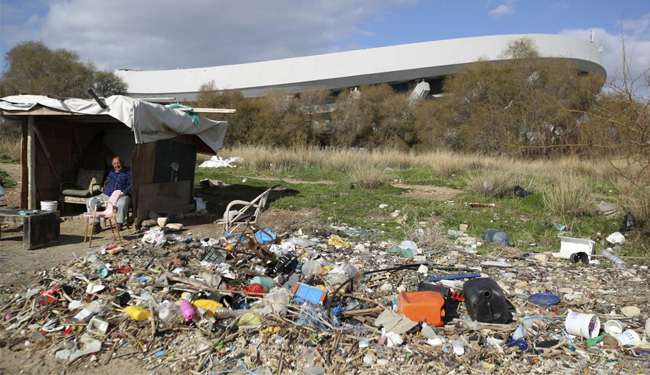 LEGRENA, Greece — Dressed all in black and preparing his diving gear with loud zips and clicks, George Sarelakos looks like he’s part of a Greek naval operation ready to storm an island or take down smugglers.

He’s not — but he and four other volunteer divers do have a challenging mission: Clearing the plastic trash from the sea floor that’s suffocating Greece’s marine life.

In a heavy rain, they struggle to clamber off the rocks along a stretch of coast south of Athens favoured by day-trippers looking for a nice place to swim within driving distance of the Greek capital.

“Most beaches are clean because they’re tidied up by municipalities. But the big problem is on the seabed. It’s is like a garbage dump,” Sarelakos said.

In January, the European Union launched a major campaign to reduce plastic waste across its 28 member states.

Greece starts the 12-year program with major disadvantages: An alarming rate of single-use plastic consumption, a waste management system largely neglected during a decade-long financial crisis and the longest coastline in the EU — nearly double the length of India’s.

Within an hour, Sarelakos and his rubber-suited companions bring up large clumps of garbage, mostly old tires, tied into bundles with rope. A curious dolphin inspects their work before darting off to a nearby fish farm.

“All this is death for sea life. It’s a problem that most people are totally unaware of,” Sarelakos says.

In a 2015 study, researchers trawled five coastal areas in the eastern Mediterranean and found that 60 per cent of the marine litter detected was in the Saronic Gulf bordering greater Athens. And 95 per cent of that trash was plastic, much of it single-use items like supermarket carrier bags or water and soft drink bottles.

The EU plans to make all plastic packaging on the market recyclable by 2030, and wants member states to crack down on single-use plastic, with consumers using no more than 40 lightweight plastic bags annually by 2025.

A few countries have already zoomed past that target: Finns on average use just four plastic bags a year. But for Greeks — now accustomed to sipping coffee out of plastic cups using plastic straws and with kiosk beverage coolers within easy reach of every city dweller — it’s become part of the lifestyle. They use 296 bags per year, according to the EU Commission.

Local surveys suggest the number is even higher.

Greek stores began charging for plastic bags on Jan. 1 — a relatively small step for a country still heavily reliant on coal-fired power plants and which is regularly fined for its large number of unregulated garbage dumps.

Only 16 per cent of trash is recycled here, compared with the EU’s average of 44 per cent. Nearly everything else ends up buried in trash dumps.

At Fyli, the country’s largest landfill on the outskirts of Athens, bulldozers constantly reshape mountains of garbage in a quarried hillside, squeezing out a dark liquid called leachate to leave enormous stacks of brown-coated plastic. A steady flow of garbage trucks is co-ordinated by loudspeaker, and their entry is accompanied by packs of seagulls ready to swoop on the fresh new trash.

The site’s environmental officer, Ioanna Kapsimali, is another volunteer diver in the Athens marine cleanups. She says it’s impossible to contain all the plastic at the landfill.

“Plastic is the most difficult material, given its chemical composition,” she said, noting that it’s so light it can be blown away by the wind and end up in the sea. “That happens with quite a large amount (of plastic). It causes problems because the plastic breaks up and is ingested by fish, birds and other animals.”

Pieces of trash, including bottle caps and cigarette lighters, end up in the stomachs of birds and marine creatures, who are also often tangled in plastic nets.

A few lucky creatures end up at Maria Ganoti’s animal clinic in Athens. The director of the Greek Wildlife Care Association recently treated an injured seagull.

“We’ve had cases where animals have died and in the autopsy we find plastic items in the stomach, usually pieces of synthetic rope, which had been mistaken for a worm or a small snake,” Ganoti said, speaking over the loud squawk of injured birds.

“If the animal swallows a large piece of plastic, it doesn’t get broken down. It takes up space in the stomach and at some point . it will starve to death.”

According to pollution activists, Greeks are largely unaware of their country’s plastic problem because bathing water quality remains high in most parts of the country and most of the pollution is not visible.

But visit a Greek shoreline not used by swimmers and that picture can quickly change.

Conservationists say the Kolovrechtis Marsh north of Athens is threatened by a trifecta of environmental assaults: plastics washing up on its shores, fertilizers used by surrounding farms, and waste from nearby factories that include a ferronickel plant. The trash ending up at the small, protected nature spot endangers the nearly 200 types of birds found there, including hawks, herons and green-headed wild ducks.

On a three-hour trash collection with volunteers and municipal workers, plastics were cleared from a small strip of beachfront on the edge of the marsh — including 3,476 plastic bottles and 549 plastic bags.

Spanish volunteer Fran Vargas joined the effort, digging into the sand with his hands to pull out buried plastic bags. Nearly everything he found was single-use plastic.

“We know that no matter how much garbage we collect, it will always be a fraction of what is going into the sea,” he said. “So this is about making a point: That this is a big, big problem and that we need to stop — now.”