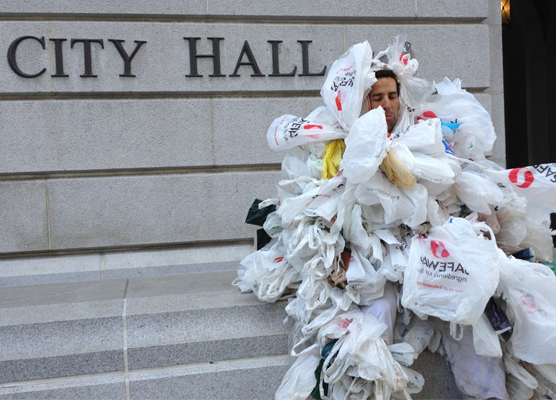 Hi-Plast was one of the largest plastic bag manufacturers in the country, with an export market too.

Had these been days past, the vacuous space would be busy with a day-time shift of at least 200 employees hard at work to meet the 40 million bags per day production volumes.

Instead, today a small army of workers are busy dissembling machinery.

Two forklifts hiss about as they carry them out.

ACTIVITY
In one of the plastic bag printing machines, a roll of material that was midway through production for Easy Clean steel wool remains spooled onto the rollers collecting dust.

This is one of the few machines that are still being unfastened from the ground they once so gloriously roared atop.

The rest of the floor a recurring motif of imprints where the heavy machinery sat now just that, tracks marked out by a mixture of dust and grime.

The flurry of activity and din of spanners against heavy metal in this high-walled 6,500 square feet godown makes it hard to make out the conversation muttered under the managers’ breaths.

What is for sure, however, is how glum their exchange is.

NEW MARKET
The company, which has been in operation since 2007, had an average annual turnover of Sh1.2 billion and employed more than 400 casual labourers daily.

“We’ll be selling some of the equipment to scrap metal dealers, while some of it will be moving to Jinja, Uganda, once we’ve completed talks with the government there to set up the manufacturing plant. If that fails, we’re also looking at DR Congo,” Executive Officer David Mbugua said.

“We tried to talk to the government about a permanent solution to waste management but nobody is listening,” he added.

Manufacturers also tried petitioning the government through the Kenya Association of Manufacturers to no avail.

“We don’t want to fight with the government. We’ve tried everything we could.

“If we sit and wait then we are still accumulating debts with the landlord of the godown and electricity bills,” he said.

“In the stores, about three tonnes of bags of raw material are still stacked up wall high because we weren’t sure if the ban was going to be lifted or not,” Mr Mahesh Dodhia, the company’s owner, said.

SALARIES
He follows us around the hollow halls as we conduct our interview with Mr Mbugua.

He says little but the bleakness and anguish is written all over his face.

Mr Dodhia says they began by ceasing operation once the ban came into effect but hoped for “some sort of reversal of the ban by the government”, which did not happen.

Now, the company is clearing with employees and will be done with paying benefits this month, he says.

This month, he will also hand back the godown to its owners – who walk in shortly after we start our interview, perhaps to check on progress of the vacation.

BAN
A ban on the use, manufacture and importation of plastic bags, imposed in March by the Environment ministry took effect on August 28, forcing most of the local makers to shut down.

The story is not that different at other polythene bag companies, which are reeling from the effects of the ban.

The clearance only allows them to manufacture a select number of plastic bags for milk producers, cereals, pasta, wheat and maize flour.

Although the clearance does not allow for packaging bags for bread, the two manufacturers are still doing so.

OFFENCE
The permit is only valid for a year after which the manufacturer is reassessed for an extension.

The bags will be legibly and permanently labelled to indicate the product being packaged, the name of the maker of the bag and the end-users and their physical addresses for ease of monitoring traceability once found polluting the environment.

The permit to manufacture was issued on condition that the makers take responsibility for a take-back system for proper disposal or recycling.

Nema Director-General Geoffrey Wahungu warned the makers of these permitted bags that, “It is an offence if your plastic bags are found littering or in open disposal sites, and failure to meet these conditions upon which the permit was issued, would lead to cancellation of the clearance certificate”.

RECYCLING
According to the Nema certificate, the bags shall be prominently marked with a notice asking the public to “return to my shop” for recycling.

At the two factories, whole sections with rows of extruders and rollers and the bagging section have sat idle since the ban took effect.

At Ramco, these have since been covered with huge sheets of polythene possibly to protect them from dust, while at Bobmil the room went cold and the power was turned off.

“We were making 450 to 500 tonnes of bags daily mostly for primary industrial packaging and a few for Naivas and other small supermarkets, [but] that has reduced to 200 tonnes. We’ve laid off 60 employees from the 200 we had.”

KHAKI BAGS
Ramco had just imported Sh15 million equipment in March before the ban, to expand their production.

About Sh140 million worth of investment now lies idle behind the walls, according to Mr Anakadi.

We, however, find the director, Mr Gautam Patel, as he is supervising the installation of new equipment for khaki paper bags production in response to the ban.

“We have already imported paper from Sweden and Tanzania and we hope that Pan-Paper will soon come around,” he said.

Bobmil said it lost about half of its business capacity of 400 tonnes – worth Sh40 to Sh50 million a month.

Mr Elijah Wambua, the group general manager, said a Wicketer polybag machine that had been ordered from Italy had to be stopped.

“The saddest part for me has been sending about 40 per cent of the employees home. We’re counselling them as we release them,” he said.

Other manufacturers like Laneeb Plastic Industries Ltd would not allow the Sunday Nation to access their premises.

There was still movement in the premises but it was difficult to establish whether business was still ongoing.

Manufacturers have criticised the government, claiming Nema has allowed the importation of an even more hazardous bag in the form of now popular non-woven carriers.