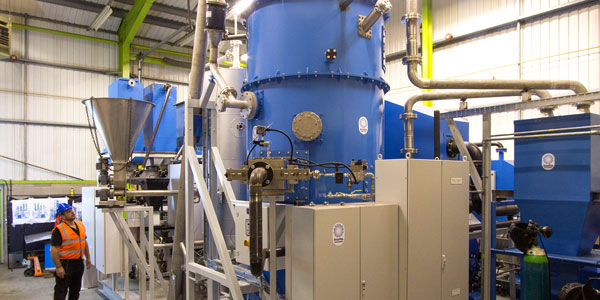 The new 25,000 square foot facility in Stirling Court, Swindon, will enable Recycling Technologies to upscale the manufacture of its RT7000 machines for use in recycling centres across the UK and internationally. Adrian Griffiths, the company’s CEO, explained: “We have a goal to triple Europe’s current plastic recycling capability by 2027 through the provision of 10 million tonnes of urgently needed new waste plastic recycling capacity.

“[The facility] will be capable of manufacturing 200 RT7000 machines a year to meet the growing demand for plastic recycling capacity in the UK, Europe and the rest of the world.”

He added: “This facility would not have been possible without the support we have received from our shareholders, staff, the great research and development facilities at the UK’s top universities and business grants from government and local business development agencies to commercialise this technology.

“A special thanks is owed to Swindon Borough Council, [which] had the vision to allow us to develop and build our pre-production machine at its recycling centre and help us achieve this milestone in tackling the global problem of waste plastic.”

Alongside the new factory facility, Recycling Technologies has expanded its headquarters and says it intends to recruit ‘in excess of’ 300 new staff.

At the opening of the facility last week (16 November), Justin Tomlinson, MP for Swindon North, commented: “I’m delighted Swindon is leading the world in the development of critically required jobs and expertise to recycle waste plastic, and that this Swindon-based company is emerging at the forefront of waste plastic recycling engineering and manufacturing to tackle this global problem.”

Recycling Technologies installed its first commercial RT7000 in June this year at the Project Beacon recycling facility in Scotland, where a range of innovative recycling businesses are located with funding from circular economy organisation Zero Waste Scotland.