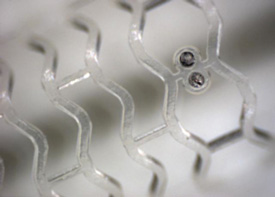 Elixir Medical Corp. (Sunnyvale, CA) is the first company to offer both durable and biodegradable platforms for drug-eluting stents. A proprietary annealling approach boosts crystallinty and strength for its plastic stent. The company announced that it now has CE (Conformité Européenne) Mark approval for its DESyne BD Novolimus Eluting Coronary Stent System for the treatment of coronary artery disease. The Novolimus Eluting DESyne stent is based on a cobalt chromium platform.

U.S. Patent 8,182,890 was awarded in May for the company’s proprietary polylactide-based technology to enhance the strength of a bioresorbable stent by increasing crystallinity through annealing without substantially increasing the biodegradation time. After modification, crystallinity is increased by at least 20% of the original crystallinity of the amorphous material. Elixir Medical is a privately funded company formed in 2005. The lead investor is the Invus Group, a New York-based equity investment firm with more than $4 billion under management.