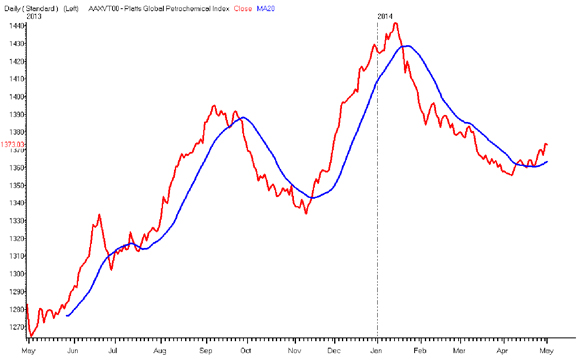 Prices in the global petrochemicals market fell another 1% in April to US$1,363 per metric ton (/mt), down just US$8/mt from March, according to the monthly Platts Global Petrochemical Index (PGPI).

The slight decline in PGPI was attributed in part to falling prices in the global ethylene market, which saw prices fall 3% to US$1,254/mt. Paraxylene prices also were lower, falling 2% to US$1,155/mt. The other five components in the PGPI were relatively stable, either climbing or falling by 1% or less.

The slight drop in petrochemical prices, was opposite of the primary raw inputs for petrochemicals – crude oil and naphtha. The global naphtha index was up 2% in April, while crude prices climbed less than 1%.

Prices of olefins were lower in April. Ethylene inventories grew during the first quarter of 2014, which put downward pressure on prices and accounted for the largest price drop in April of all the PGPI seven components.

In the US, ethylene inventories were at a 12-year high, according to the American Fuel and Petrochemical Manufacturers Association. Polyethylene, a polymer produced from ethylene, was priced slightly higher in April despite lower ethylene prices. The price edged up 1% to US$1,639/mt in April, up from US$1,622/mt in March.

Prices of aromatics were mixed but mostly lower in April. Paraxylene posted the largest decline, falling 2% to US$1,155/mt, down from the March average of US$1,173/mt. Toluene prices fell US$1 in April to US$1,072/mt. Benzene was the only aromatic to post gains in April, climbing US$11/mt to US$1,364/mt.

Petrochemical prices in April got little direction from global equity markets, said Platts. The London Stock Exchange Index (FTSE) climbed 3% in April, while the Down Jones Industrial Average (DJIA) climbed 1% during the same period. The Nikkei 225 fell 4% in April.

PGPI is a benchmark basket of seven widely used petrochemicals – ethylene, propylene, benzene, toluene, paraxylene, low density polyethylene (LDPE) and polypropylene published by Platts and is weighted by the three regions of Asia, Europe and the US.

Bright Green Plastics: “All of the team went through a very steep learning curve”