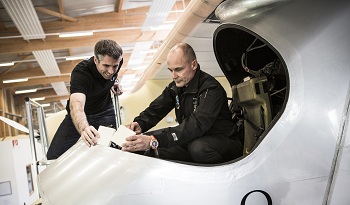 Bayer MaterialScience is expanding its contribution to the Solar Impulse project – an unprecedented around-the-world flight powered solely by solar energy scheduled for take-off in 2015.

The company is responsible for the complete design of the cockpit shell of the second, improved model. Among its contributions will be an innovative, extremely high-performance insulating material. Solar Impulse (Payerne, Switzerland) and Bayer MaterialScience (Leverkusen, Germany) announced recently that the new solar aircraft is expected to be completed in late 2013 and will conduct test flights the following year.

“We are now deepening our involvement as we go from materials supplier to system leader for the new cockpit,” says Patrick Thomas, Chief Executive Officer of Bayer MaterialScience. “The Bayer Cross will be displayed on the aircraft in the future as a visible symbol of our commitment to this excellent partnership.” Bayer MaterialScience is contributing a variety of products and solutions to ensure that the second, larger model of the futuristic aircraft will be lightweight, yet retain its rigidity. For example, because the cockpit cowl will be hinged for the first time, a section of it is being supported with a carbon fiber-reinforced plastic where polyurethane is the matrix.

“The component is molded using the resin transfer molding (RTM) process with a fiber loading is 60%,” says Dr. Bernd Rothe, lead engineer of the Solar Impulse project. In addition, the innovative polyurethane foam Baytherm Microcell will be used as insulation in certain places. It is being developed together with the chemical company Solvay (Brussels, Belgium) for use in the new plane. The material offers significantly greater insulating performance than the current standard because Bayer researchers were able to shrink the pores in the foam by an additional 40 percent.

Highly efficient insulation is particularly important for the aircraft because it must withstand temperature fluctuations between minus 50 degrees Celsius at night and plus 50 degrees during the day. “The significantly larger size of the new cockpit shell and Solar Impulse’s tight weight budget meant that we had to further optimize the weight through design measures and targeted choice of materials,” explains Martin Kreuter, Solar Impulse project manager at Bayer MaterialScience. Another innovation announced by Kreuter was the use of Baytubes carbon nanotubes (CNTs) in carbon fiber-reinforced structural components in order to reach more savings both regarding material and weight.

The composite used here is based on epoxy resin with 0.6 weight percent of CNTs. “With CNTs, the interlaminar shear strength (ILSS) is approximately 30% higher than that of a conventional composite,” says Rothe. “Weight is not significantly different.”

“[Use of this CNT composite] will allow us to enlarge the wings of the new aircraft and increase the number of solar cells mounted on them,” says Kreuter. The current model, which has the wingspan of an Airbus [63.4 m] and weighs as much as a mid-size car [1,600 kg], has 12,000 solar cells on its wings. Solar Impulse CEO and cofounder André Borschberg says that work on the aircraft is already far advanced. “80 percent of the design phase and 50 percent of the construction phase have been completed.” The first manned around-the-world flight in a fuel-less aircraft is scheduled for takeoff in early 2015.

The flight is expected to take 20 flight-days, with five to six needed just to cross the Pacific and two to three for the Atlantic crossing, according to Borschberg. Including the necessary breaks, the solar-powered aircraft’s journey from west to east will take a total of three to four months. Solar Impulse HB-SIA is the first aircraft that can fly day and night without fuel or polluting emissions. It demonstrates the huge potential of new technologies in terms of energy reduction and the production of renewable energy. This revolutionary carbon fiber aircraft, that has the wingspan of an Airbus A340 (63.4 m) and the weight of an average family car (1,600kg), is the result of seven intense years of work, calculations, simulations and tests by a team of 70 people and 80 partners.

A plane this light and of this size has never been built before. The 12,000 solar cells built into the wing provide four 10HP electric motors with renewable energy. By day the solar cells recharge the 400 kg lithium batteries which means the plane can fly at night. The first model will be deployed on additional missions. “We are studying several possibilities and it could perhaps be making its first flights around the United States next year,” says Bertrand Piccard, the initiator and Chairman of the Swiss project that proves clean technologies are fully reliable allowing to drastically reduce energy consumption. So far the solar aircraft has completed flights in Europe and most recently to North Africa.

Author plasticsinfomart 22
COVID19 turned our frontline staff into our first responders on the ground. To make our manufacturing operations more resilient in 2021, we need to...
Read More