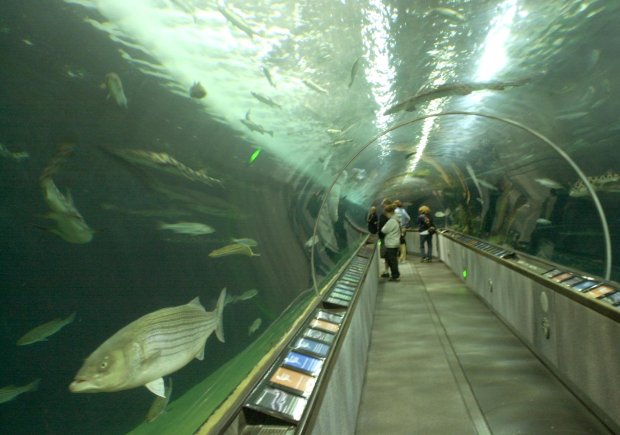 Working to reduce the massive amount of plastic pollution in the world’s oceans, 19 of the nation’s top aquariums on Monday will announce that they are phasing out most plastic products — from plastic bags to straws to plastic beverage bottles.

The effort, which will also include the creation of exhibits explaining how people can find alternatives to plastic, is an attempt to raise consumer awareness among the 20 million people who visit the 19 aquariums, which include the Monterey Bay Aquarium, San Francisco’s Steinhart Aquarium and the Aquarium of the Pacific in Long Beach.

The aquariums say their goal is a market-based approach that they hope will steer the buying habits of the public to change the vast supply chains that manufacture, deliver and sell products to businesses across the world.

They compare the campaign to the Monterey Bay Aquarium’s highly successful “Seafood Watch” program, which has provided 57 million wallet-sized cards to shoppers since 1999 telling them which types of fish are best or worst to buy based on a green-yellow-red scale.

As consumer demand changed, that program contributed to Walmart, Target, Safeway, Whole Foods and many of the largest retail stores in the United States announcing that they would sell only seafood caught in sustainable ways that didn’t lead to overfishing.

“The market can be very powerful,” said Ken Peterson, a spokesman for the Monterey Bay Aquarium.

Plastic is a growing problem. Every year, 8.8 million tons of plastic enter the world’s oceans, roughly a dump truck full every minute of every day, according to a 2015 study published in the journal Science. At current rates, it is expected to double by 2025.

Not only does the litter entangle and kill birds, fish, seals and other marine life, some plastic objects are mistaken for food like jellyfish by sea turtles and other animals, which eat them and die.

So much plastic has poured into the world’s oceans in recent decades — much of it washing from land — that a vast area known as the “Great Pacific Garbage Patch” has grown in size. The area, hundreds of miles across, contains trillions of tiny pieces of plastic broken apart by waves. Tons of plastic washes up every year on the beaches at Midway and other Pacific islands. And studies of albatrosses and other wildlife have discovered large amounts of plastic in the stomachs of dead birds, particularly chicks.