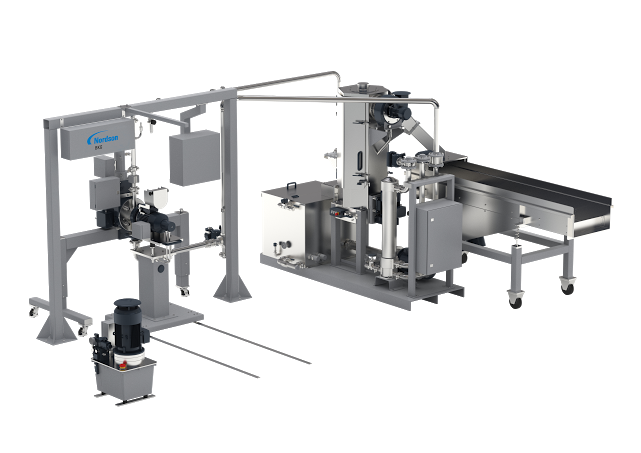 MÜNSTER, GERMANY, February 10, 2014: An integrated system that uses the thermal energy of the molten polymer in PET pelletizing for subsequent crystallization eliminates problems caused by the agglomeration of amorphous material and substantially reduces energy costs for compounding or recycling, according to Nordson BKG™.

Called CrystallCut®, the patented* process avoids the need to cool PET after pelletizing and then reheat it for crystallization. As an integrated network that incorporates underwater pelletizing, drying, and crystallizing, it is designed for precise control of material temperatures throughout the process, preventing production and quality problems caused by insufficient crystallization and excess levels of amorphous material. The energy efficiency of the CrystallCut system can save more than € 3,000,000 in annual energy costs for a typical PET resin plant and nearly € 200,000 for an extrusion line recycling PET bottle flakes, according to examples cited by Nordson BKG™ based on actual commercial installations (see graph for an example relating to polymerization).

“The CrystallCut system provides substantial relief to the cost pressure on PET polymerization and recycling, particularly as prices for PET fall,” said Ralf Simon, managing director of Nordson BKG™. “In addition, because the system utilizes residual thermal energy within the material to crystallize pellets from the inside out, it yields an enhanced crystalline structure that results in lower energy costs for re-melting the material.”

In the CrystallCut system, the hot PET granulate produced by the face cutter of the underwater pelletizer is transported rapidly to the pellet dryer in hot water (up to 95 °C) through closed conveying pipes, where pellet cooling and solidifying takes place. This conveying medium and the short distance between die head and dryer are keys to conserving the heat from melt processing. The pellets are at a temperature in the 150 to 160 °C range when they exit the dryer onto a vibrating conveyor.

This keeps the pellets in constant motion, generates a uniform distribution of thermal energy, and prevents pellets from sticking together. At the completion of the process, the pellets have a temperature of approximately 180 °C, have achieved up to 40% crystallinity, and may be transferred directly to solid state polycondensation (SSP).

In addition to saving energy costs and preventing amorphous PET clumping, the CrystallCut system yields an almost dust-free product and increases bulk density by 8% in comparison with a conventional process.

Substantial Savings in Energy Costs Achievable with CrystallCut® System
Assuming an average energy cost of 12 cents/kWh, Nordson BKG™ estimates that the CrystallCut system yields energy savings of up to 125 kWh or € 15 per ton of PET in a modern PET polymerization plant. Since such a plant can achieve a production capacity of 600 tons per day, these savings amount to € 9,000 daily and € 3,200,000 per year. This represents an annual energy saving of more than 26 gigawatt hours, or 26,000 megawatt hours.

Another example cited by Nordson BKG™ is that of an extrusion line which recycles PET bottle flakes at a rate of 1,500 kg/h. The savings achievable with the CrystallCut system exceed 180 kWh, or more than 1.4 cents/kg. In a 365/24 operation this equates to € 190,000 per year.

Founded in 1994, Nordson BKG™ produces underwater pelletizing and drying systems and has installed its systems worldwide. Originally part of the Kreyenborg Group, it was acquired by Nordson Corporation in 2013. The BKG™ brand is headquartered in Münster, Germany. Tel: +49 (0)251 21405 0. info@kreyenborg.com. Visit www.kreyenborg.com.