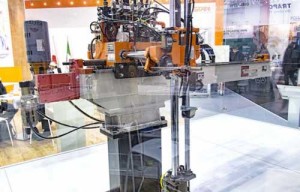 The purpose of a trade show like K 2016 in Dusseldorf last month is to show off new products to entice buyers. But Star Automation Inc. took the contrary approach, highlighting a 34-year-old model at the center of its booth, which was still running just fine.

This MHY-L900 II unit was purchased from the Italian customer, Rigamenti Srl, which had been running the robot since 1982. The paint was scratched a bit, and the overall design was a lot less clean than sleeker current models, but “old faithful” kept on cycling without complaint.

Technology marches on: Equipment gets faster, more energy efficient, and easier to maintain. But sometimes hardware that’s well made and well maintained will just keep on doing its job, long past the horizon of nominal obsolescence.

It’s no wonder that machine suppliers sometimes have a hard time convincing processors to let go of “old faithful” and scrap it or trade it in for a new model. At a respectful distance from the battle-scarred veteran, Star Automation showed off a new model (not aimed at the U.S. market). The unspoken message seemed to be, “Take good care of it, and you’ll have plenty of time to grow attached to it.”