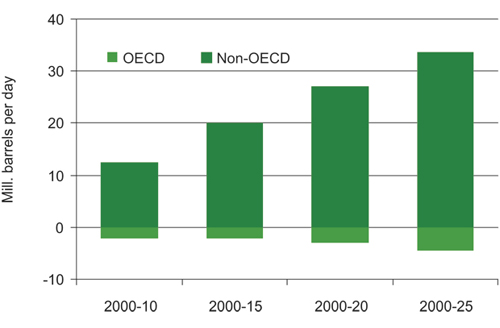 China’s demand and throughput of oil will pick up in the second-half of the year as the government growth incentives take hold, according to a recently released Platts analysis.

“The government will be eager to boost economic growth by the time the decennial political leadership transition occurs in the fourth quarter,” explained Ms Song. “We could see oil demand rebounding at the end of the year, which on balance should put growth at 3% to 4% for the full year.”

China’s apparent oil demand rose 2.4% year on year in July to 38.92 million metric tons (mt), or an average 9.2 million barrels per day (b/d). This is a rebound from June’s first monthly contraction in more than three years.

In June, demand fell 1.9% year on year to 9 million b/d, as China’s struggling economy was hit by poor exports and slowing manufacturing activity. Platts says July’s gain is largely due to the 810,377 b/d rise in oil product imports to 3.09 million mt, which boosted net imports of oil products 53% or 346,181 b/d from June to 1.32 million mt. Net product imports are up 65% from July a year ago.

Gasoil, which makes up the largest component of China’s oil product mix, exposed July’s underlying weakness. “Gasoil has been the laggard so far, with apparent demand contracting two months in a row due to the slowdown in industrial activity,” said Song Yen Ling, Platts Senior Writer for China.

Author plasticsinfomart 84
Oil rose to nearly $50 a barrel on Thursday but gains were limited as mixed data from the United States and China reminded investors...
Read More