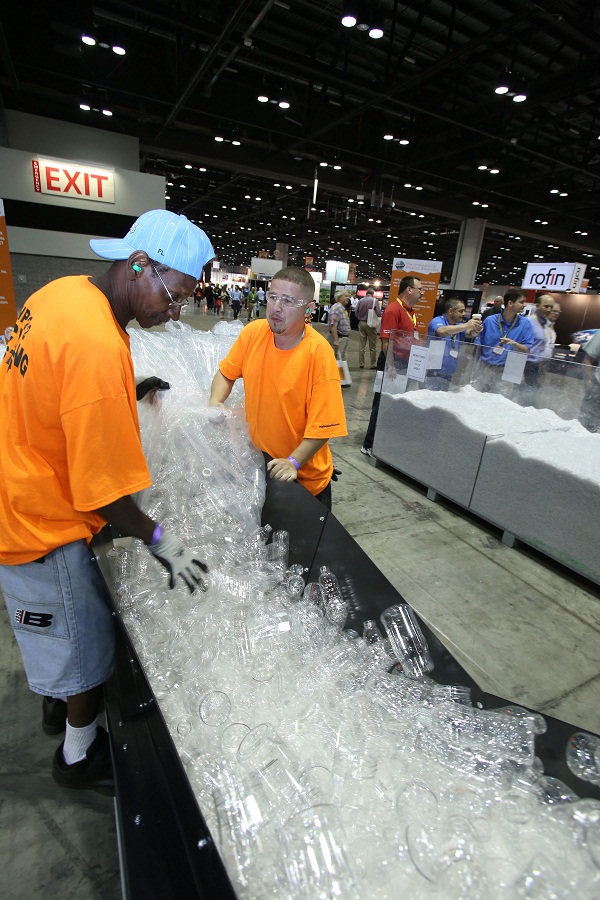 Other than Food, None of the Waste Generated by Exhibitors or Visitors in the Giant Exposition Ended up in Landfills,  according to SPI and the Convention Center.

For five days in April, the NPE2012 international plastics exposition transformed the Orange County Convention Center (OCCC) in Orlando, Florida into a virtual manufacturing city, generating many tons of industrial scrap in addition to packaging and other post-consumer waste. None of it, however, ended up in landfills, according to the OCCC and SPI: The Plastics Industry Trade Association, which produces the triennial NPE.

Final figures provided to SPI by Maine Plastics, Inc., the official recycler for NPE2012, indicate that the production scrap generated by machinery operated on the show floor by 56 exhibitors participating in the “NPE Recycles” program amounted to 260,208 lb. (118 metric tons). This was more than double the 125,040-lb. (57-ton) total for NPE2009, where 45 exhibitors participated.

A rule set by SPI required that scrap generated during NPE2012 by exhibitors not participating in the NPE Recycles program could not be disposed of as waste. These exhibitors were responsible for having their process scrap delivered to the OCCC loading dock for sorting off-site.

NPE week also generated large quantities of post-consumer solid waste—908,620 lb. (413 metric tons), according to the OCCC. All of this was recycled except for 157,700 lb. (72 tons) of food waste, which went to landfills.

In addition to having more participants and recycling more scrap than in 2009, the 2012 NPE Recycles program collected 67% more scrap on a per-exhibitor basis, noted A.J. Janosko, SPI’s director of trade show operations. “Individual exhibitors generated more scrap during NPE2012 than in 2009 chiefly because they had more machines operating on the show floor,” Janosko said. “The economic and logistical advantages of exhibiting in our new venue in Orlando, along with the improved business climate, encouraged equipment companies to invest more in their booths, resulting in what SPI called ‘The Return of the Machines’.”

Author plasticsinfomart 18
By 2015, full scale recycling of photovoltaic (PV) modules that were installed in the 1980’s and 1990’s will begin. The solar industry is proactively...
Read More