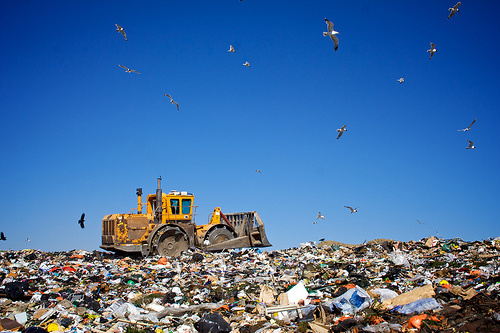 Plastics are a pain. They are very useful during their product life but once disposed they don’t degrade naturally, and this creates huge problems in terms of waste disposal. Researchers in India have developed a process that can turn old low-density polyethylene (the most common form of plastic waste) into usable liquid fuels.

Plastic is a long chain polymer produced from refined oil products, and this new process takes advantage of that by breaking apart the polymer chains into smaller pieces and turning the plastic into a different product, that being liquid fuels such as paraffin and olefin.

The ability to convert waste plastics (such as old plastic bags) into liquid fuel will help solve two problems; reducing the amount of rubbish dumped in landfills, and increasing the supply of alternative liquid fuels in order to reduce dependence on oil.

Achyut Kumar Panda, a chemist from Centurion University of Technology and Management in Odisha, India, is working closely with Raghubansh Kumar Singh, a chemical engineer from the National institute of Technology in Orissa, India, to develop a commercially viable version of that process that uses relatively low temperatures.

The press release announcing their research explained that they heat “the plastic waste to between 400 and 500 Celsius over a kaolin catalyst. This causes the plastic’s long chain polymer chains to break apart in a process known as thermo-catalytic degradation. This releases large quantities of much smaller, carbon-rich molecules. The team used the analytical technique of gas chromatography coupled mass spectrometry to characterize these product molecules and found the components of their liquid fuel to be mainly paraffins and olefins 10 to 16 carbon atoms long. This, they explain, makes the liquid fuel very similar chemically to conventional petrochemical fuels.”

Kaolin is a clay mineral, and acts as a catalyst to the reaction by providing a large surface on which to place the polyethylene molecules whilst they are exposed to high temperatures which breaks apart the polymer chains. After experimenting with various combinations of temperature and catalyst, the team found that the optimum process converted more than 70% of the plastic into liquid fuels, with the extra 30% taking the form of combustible gases and waxes. This means that every kilogram of plastic is able to produce 700 grams of fuel. They were able to boost this conversion figure to 80%, but it required a huge amount of catalyst, burning 1kg of kaolin for every 2kg of plastic, and making the process too costly.

Author plasticsinfomart 61
Procter & Gamble and General Mills are being asked, through shareholder resolutions, to fund recycling programs for their packaging waste. Advocacy group As You...
Read More