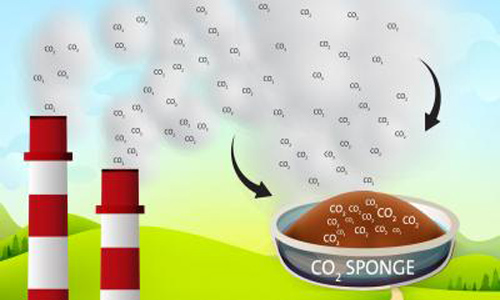 The path towards using new cleaner energy sources has been brought one step closer thanks to a research team at the University of Liverpool, who have developed a microporous organic polymer which demonstrates outstanding carbon dioxide adsorption characteristics.

This new material could serve as a key element of the integrated gasification combined cycle (IGCC) technology , which is capable of transforming fossil fuels into hydrogen gas. Hydrogen produces almost no pollution, which makes it ideal for applications such as electricity generation and in fuel-cell cars.

This sponge-like plastic thrives under the high pressure conditions of the IGCC process as the carbon dioxide is adsorbed in the small spaces between the molecules of this adsorbent, causing it to swell.

The material discharges the carbon dioxide it has adsorbed when the pressure drops. The released carbon dioxide can then be collected for storage or transformed into valuable carbon compounds.

The new adsorbent, which is a similar material to the plastics used in food boxes, is a sand-like powder which is brown in colour.

It consists of a network of tiny carbon-based molecules and can tolerate the adverse environments in power plants which use carbon dioxide adsorbents thanks to its ability to withstand the effects of boiling acid.

Additionally it is both cheaper and more effective than other adsorbents as it does not require the involvement of water vapour in the process.

It is hoped that the spongy polymers can be easily embedded in existing membranes which are already being evaluated for the removal of carbon dioxide from the exhaust of power plants.

This new material could play a key role in the development of the zero-emission technologies of the future.