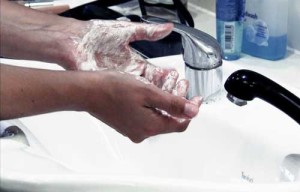 The ban on tiny bits of plastic is aimed at protecting marine wildlife and is expected to apply to many common beauty products.

Microbeads in household products such as toothpastes and beauty products may be outlawed from next year, Sky News understands.

The move follows a report from MPs citing damage caused by the tiny plastic balls to marine wildlife and contamination of the human food chain.

Ministers are set to unveil plans for a ban on Saturday, with further consultations expected on which products will be affected.

It is believed that the ban will be in place by the end of 2017.

According to MPs on the Environmental Audit Committee, 680 tons of the beads are used in the UK each year.

A single shower can wash 100,000 microbeads down the plughole.

The cosmetics industry had vowed to phase them out by the end of 2020, but the ban would accelerate this process.

Scientists warn the microbeads add to the pollution caused by microplastics.

These are fragments of everyday items that have been broken down by sunlight and the churning of the waves.

They estimate between 15 and 51 trillion pieces, just millimetres across, are in the world’s oceans.

It has been estimated that an average plate of oysters could contain up to 50 plastic particles.