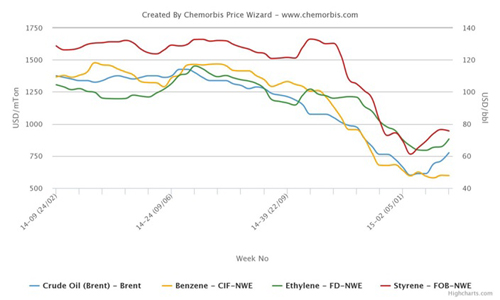 After €30-40/ton drops passed on February PS deals, players in Europe are now expecting the market to change direction next month based on the stronger upstream chain and short supplies, particularly for GPPS as per ChemOrbis pricing service. In line with firm expectations for new monomer contracts in the region, PS players foresee that prices may move up between €30-70/ton.

Expectations for March styrene contracts center on €30-50/ton increases amidst higher expected ethylene settlements due to a total rise of €70/ton in spot ethylene compared to early February. Spot benzene costs gained $20/ton on CIF NWE basis week over week and rose $25/ton since February started. Spot styrene prices held steady on the week while they soared by $60/ton when compared to early February on FOB NWE basis. The main driver behind firmer costs is the energy market, where ICE Brent crude futures rallied almost $6/barrel over the week.

A distributor in France thinks that increases of around €50/ton are possible on new styrene contracts as he also expects a €75/ton rise on ethylene. He hopes supply issues for GPPS will be solved in March. In Italy, a distributor of a West European origin reports, “We couldn’t procure additional material as the producer has closed orders in the second part of the month. Styrene monomer may erase the decreases seen in February soon.” Another seller commented, “We almost finished our monthly allocation. Producers are not providing material now and will apply some increases in March, but demand is unsupportive for sharp variations for now.”

Buyers confirm that producers are postponing orders to March. A disposables manufacturer in Belgium highlights, “Our West European supplier has no allocation and if we purchase now, deliveries will not be made until early next month.” An insulation converter in Germany says, “GPPS availability is very tight across the region. We had to purchase from a different source as our regular supplier was not able to provide our usual volumes. Our end business is stable but we are producing more than we need since we secured more volumes due to our concerns for hikes in March.”

In Italy, a packager complained that it is hard to procure material as their suppliers received more enquiries than expected and ran out of material. “Our South European supplier already received orders 1000 tons above their usual volumes. Very limited amounts of Russian and South Korean materials were left by the middle of the month too,” he noted. Another buyer reported paying €50/ton drops for HIPS and €30/ton for GPPS given reduced supplies for this product.

Meanwhile, a couple of converters reported having difficulties finding sufficient Egyptian GPPS this month. The Egyptian producer lifted their GPPS prices by $180/ton due to firmer crude and monomer prices by mid-February after issuing drops initially. Their export prices indicate $80-130/ton increases from January.

According to ChemOrbis, firm expectations arose in nearby Turkey too as European suppliers are expected to keep their allocations limited to the country for another month. Distributors of two West European producers concurred that they already closed this month due to lack of additional supply from their sources. “We expect around €100/ton hike attempts for March,” one of them said.