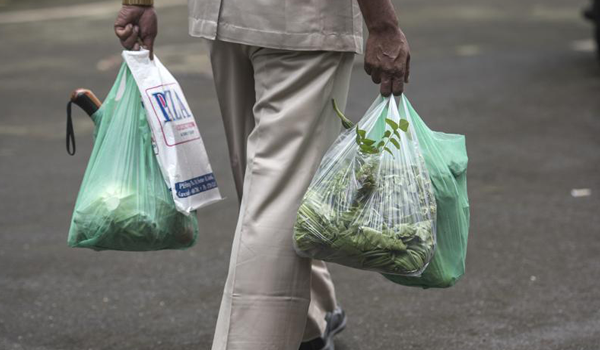 Most complained about the alternatives on offer being too expensive or difficult to procure in comparison to plastic bags and containers.

Even as the Brihanmumbai Municipal Corporation (BMC) plans to levy fines for violation of the ban on plastic carry bags and single-use plastic items, hundreds of traders and retailers in the city remained uncertain of what alternatives to use for packaging.

While shops in some suburbs remained shut on Saturday as traders mulled alternatives to plastic, a three-day exhibition organised by the civic body on “alternatives to plastic” ended on Sunday with the civic administration receiving flak from scores of visitors. While hundreds showed up at the National Sports Club of India in Worli, most complained about the alternatives on offer being too expensive or difficult to procure in comparison to plastic bags and containers.

Amar Khamkar, proprietor and distributor of Khamkar Masale in Lalbaug, said: “The exhibition had stalls showing bags and packaging made of corn starch, etc. However, those cost four times more than plastic. Furthermore, they do not look reliable to me for packaging our spices. I am still clueless on alternatives to plastic.”

Visitors at the exhibition included wholesalers, retailers, and businessmen, all slamming the BMC for implementing the plastic ban without providing effective alternatives. Many wholesalers and retailers rejected alternatives exhibited saying these were either too expensive or not suitable.

J S Khurana, owner of Gulati Sweets and Restaurant at Sher-e-Punjab in Andheri (East), said: “I was looking for an alternative to pack food for home delivery. How do we deliver soup and gravy in paper containers? I found no effective alternative at the exhibition. They want to impose a ban on plastic bags saying these choke our drains. I found a decomposable plastic bag at one of the stalls at the exhibition, which takes at least three months to decompose. Will that not choke our drains till then? No officials could reply.”

The exhibition included displays by private companies and self-help groups and sale of eco-friendly, biodegradable and compostable products such as carry bags, handbags, bags made of corn starch, garbage bins and sanitary napkins.

On Sunday, the second day of the ban, BMC vigilance squads raided 867 commercial establishments and found 72 still using banned plastic items. During these raids, the civic body seized 591.67 kg of plastic and collected Rs 3.35 lakh as penalty. The BMC started levying fines from Sunday after creating awareness among retailers, wholesalers, hawkers/vendors and ordinary citizens. Under the awareness drive that continued till Sunday, 249 inspectors, divided into 23 teams, visited retailers, shopkeepers and hoteliers. On day one, the BMC collected fines from only four eateries in Parel, all four paying a fine of Rs 5,000 each.

Despite the ban, plastic bags could be seen in markets and shops across the city. “Initially, we are allowing rain cover plastic used by shopkeepers. But it is also a banned item. In the first few weeks, we are targeting plastic bags, other single-use plastic items and thermocol,” said Dr Sangeeta Hasnale, Assistant Municipal Commissioner (Markets). She added: “The alternatives are expensive but they will help us get rid of the evil that is not only flooding our city but is destroying nature.” Meanwhile, workers from Raj Thackeray’s Maharashtra Navnirman Sena (MNS) have been telling people not to pay the “hefty” fine. “We have no issues with the plastic bag ban… But levying such hefty fines is wrong. The civic body should educate people, spread awareness about hazards of plastic. Just levying fines will result in harassment of common people,” said MNS leader and former BMC corporator Sandeep Deshpande.