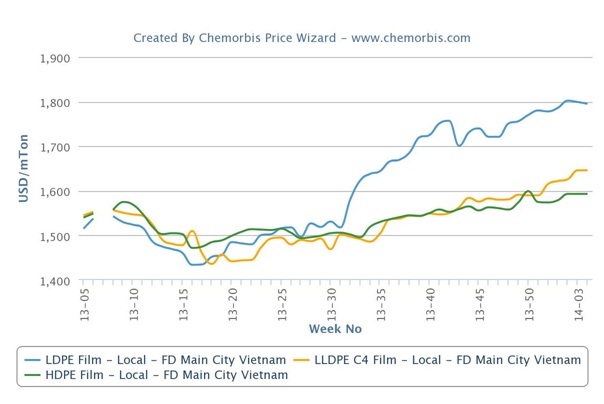 In Vietnam, buyers complained about the fact that local PE prices have been rising despite the fact that demand is slower now ahead of the Chinese New Year holiday as per the pricing service of ChemOrbis. In fact, local PE prices are at their highest levels in a year. Players attributed this situation to tight local supplies.

This stems from restricted import purchases recently due to distributors’ narrow margins. Distributors complained that after purchasing imports at increasingly higher levels, and then paying the localization costs on top of the import prices, left them without any profits after selling in the local market.

Apart from this, many overseas producers from the Middle East and Southeast Asia had elected to divert their cargoes to China over the past several months because of rising prices into that country, which netted better gains for overseas suppliers relative to other markets.

Import PE prices given to China also hit year – high levels very recently as the Chinese market remained strong. This has been the case especially since October 2013, as the firm sentiment was further boosted by flooding caused by Typhoon Fotow. Flooding reportedly soaked some polymer warehouses in the cities of Ningbo and Yuyao. This situation attracted additional quotas from overseas suppliers to the country.

Considering all of these factors, Vietnam’s PE market also gained steady increases week over week as supplies gradually tightened. A trader commented, “We received new offers from overseas producers but we are not willing to purchase them as our previously purchased cargoes will arrive after the Chinese New Year. In the local market, demand is weak but we still maintained our prices. We do not think that prices will record significant drops as the local supplies are not comfortable at all given the fact that not many traders secured import quantities during the past months due to the high prices.”

Another trader located in Vietnam confirmed the weak local demand since most buyers have already started to leave the market for the Chinese New Year. However, the trader added that they, too, do not expect any decreases given the supply issues.

According to ChemOrbis, meanwhile, a converter reported receiving higher import offers for February but added that they are not interested in making purchases at these levels. “We need to replenish our stocks after the Chinese New Year but first we want to observe the market as we cannot be sure of the market trend after the holiday.”

Change of leadership in LANXESS Board of Management

Author plasticsinfomart 66
With the auto industry showing signs of recovery, the demand for rubber by tyre companies has increased. Along with tight supplies, this has led...
Read More

Mid-Eastern suppliers approach Turkey with hefty PE hikes for May