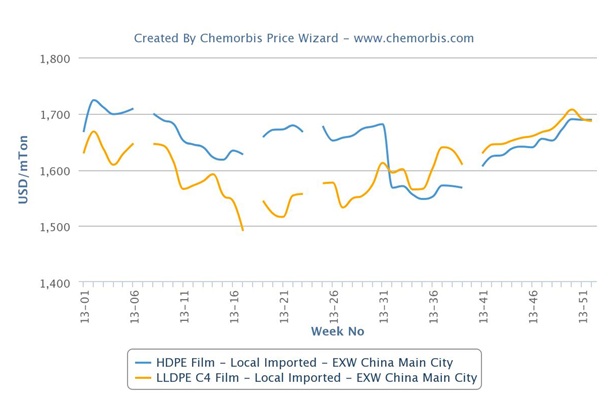 Firmer global sentiment and rising spot ethylene prices triggered an increasing trend on LLDPE film prices as of mid-May. Plus, LDPE film prices were increasing at the time due to tightness stemming from limited Iranian cargoes and an extended shutdown at a Thai producer’s LDPE plant following a technical issue.

According to ChemOrbis, demand has slowed recently for both products however. A trader reported, “Demand is slow and we face difficulties when concluding deals. Our customers are still cautious and they continue to make restricted purchases.” A distributor noted, “Local producers cut their prices in order to smooth their sales but we are not willing to offer large discounts when considering firm oil and ethylene costs.” Another distributor said, “We lowered our local prices as producers are stepping back while buying interest is slowing down ahead of the upcoming holidays.”