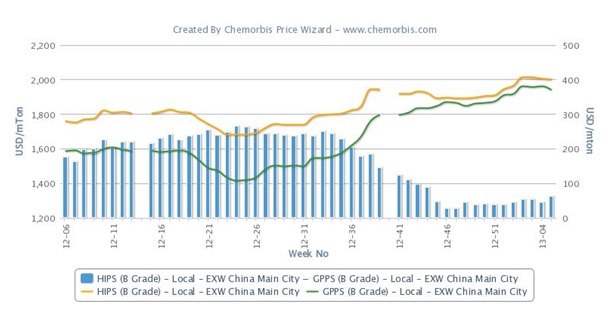 In China, given the fact that limited supply levels have been pushing local GPPS prices higher for some time, the premium between local GPPS and HIPS prices has narrowed very significantly, as per the pricing service of ChemOrbis.

Although the gap between GPPS and HIPS prices is still very close at around $55-60/ton when compared to the typical delta of $150-300/ton seen during most of 2012, GPPS prices started to ease during this past week on the back of the improved supply levels since overall availability has started to loosen following the restart of several PS plants in China earlier this month. Slower demand ahead of the approaching Chinese New Year holiday also triggered these discounts on GPPS. Therefore, the current narrow gap between local GPPS and HIPS prices widened slightly for the first time since November of last year.

Domestic GPPS prices lost CNY100-300/ton ($16-48/ton) during this past week and HIPS prices retained their levels. Distributors pointed to improved supply levels coupled with the slower buying interest for GPPS for their discounts while adding that they kept their HIPS prices stable on the back of the tight supplies for this product.

A Shanghai based trader told ChemOrbis, “Our prices followed a stable to softer trend during this past week. We had to offer discounts in order to conclude deals as most buyers have already started to be sidelined from the market ahead of the approaching Chinese New Year holiday. However, given the limited availability, trading activity for HIPS performed better than for GPPS so we could remain adamant regarding our HIPS prices.”

Another producer in China, who had issued CNY200/ton ($32/ton) decreases on their GPPS and HIPS offers during the previous week, reported keeping their list offers stable last week. However, he admitted that they had to concede to discounts in order conclude deals amidst thin demand as trading activities slowed in the last week before the Chinese New Year starts.