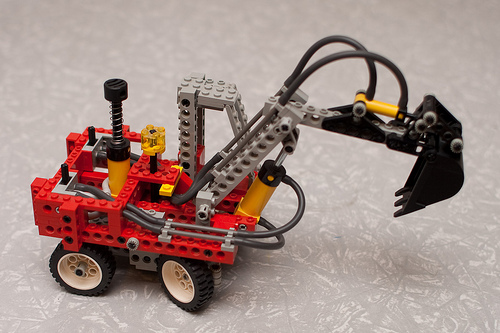 ORLANDO, FLA. — Lego A/S is setting up a target to use a sustainable resin in its signature bricks by 2030 by replacing ABS.Allan Rasmussen, senior project manager for Lego said the search for that new resin will not be easy. He said that Not only must the selected material be able to meet the same characteristics as the locking building blocks, they must also blend seamlessly with bricks already in children’s hands.

While speaking at Innovation Takes Root 2014 in Orlando on Feb. 18, Rasmussen said the sustainability quest is in its early stages, but the Danish company already has tested some bricks using an impact modified polylactic acid are “very, very close.” A problem with a post-molding “creep,” however, means that a few weeks after they are molded the bricks do not click and stick together as well as they should.

The ability to stay clicked together until a child separates them — what Lego terms the “clutch power” — is so key to Lego that it has a specific testing system for it.

Rasmussen said, the clutch power is only one issue facing any replacement. Some of the issues with those tests may be that the machines are set up to meet the requirements based on ABS and are not compatible with other resins.

Lego which is based in Billund, Denmark, has been using ABS for its bricks since the period of 1960s, following a brief period using a cellulose acetate.

He revealed the interest by saying that it is defined that it uses more than 6,000 tons of plastic each year — 70 percent of it ABS, “so that’s why I’m most interested in [replacing] that,” Rasmussen said.

It operates more than 5,000 molds on more than 1,000 injection molding presses at global production sites in Denmark, Mexico and Hungary. When Lego expands to Jiaxing, China, it will specifically be to supply the local market there, he said, so the company needs to ensure it has a global material supplier for all those locations once it is ready to change its resin.

It wants a resin that will make both economic sense as well as hitting environmental targets, and wants to ensure that it is coming from a non-food feedstock base so the business doesn’t find itself facing questions about using crops for toys vs. food.

The company also needs dual sourcing, with product available from multiple production locations, so that it can provide resin from another site if there are any problems faced at one.

Moreover, its toys must meet the standards written within 3,082 pages worth of legislation regulating toys worldwide.So it is obvious that there are major supply chain issues Lego must consider before making any material changes.

He added a few lines saying that “If I were to say that we need to change the machines because something has a different shrink rate, I’m not going to be a very popular guy.”

Then add the complications of matching the look and feel of generations of previous production.

He lime lighted a few points saying that “When I get to a conference like this, I always hear people say: ‘Oh, Lego. That’s great. I played with Lego when I was a kid, and now I’ve passed it on to my son and to his son now, and it lasts. It’s perfect.’ And I’m really torn between that.” “On the one side, I want to say: ‘Thank you. We make a good product.’ On the other side, I want to say: ‘You’ve just shown why it is my job is so damn difficult.’”