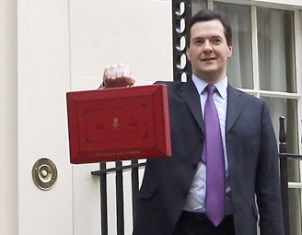 Higher packaging recycling targets for 2013-17 were confirmed in Chancellor George Osborne’s Budget today, alongside plans to radically shake up the planning system.

In a Budget which Mr Osborne said ‘unashamedly backs business’ the Chancellor also committed to cutting corporation tax and to simplifying the CRC Energy Efficiency Scheme to reduce administrative burden on businesses.

Plans for higher packaging recycling targets for businesses were launched for consultation by Defra in December 2011 (see letsrecycle.com story). Despite opposition from some such as the British Plastics Federation, the Budget confirms that these proposals will be taken forward.

Commenting on the decision, environment secretary Caroline Spelman said: “The Chancellor’s announcement today to introduce more ambitious packaging recycling targets is great news for the waste industry, the economy and the environment.

“The recycling industry continues to grow and the extra stimulus of the higher targets will keep that going, driving investment in waste infrastructure to create new jobs.”

With regards to planning, Mr Osborne also announced that the government’s National Planning Policy Framework will be published next Tuesday – which he described as the “biggest reduction in business red tape ever undertaken”.

Gaining planning permission is something which many in the waste industry have struggled with and Mr Osborne said it was integral to achieving growth in the economy.

He said: “You can’t earn your future if you can’t get planning permission…We’re replacing 1000 pages of guidance with just 50 pages. We’re introducing a presumption in favour of sustainable development while protecting our most precious environments.”

On the subject of Landfill Tax, Mr Osborne confirmed that this would rise in line with the levels previously set out. The Budget states: “The Government will increase the standard rate of landfill tax by £8 per tonne to £72 per tonne from 1 April 2013. The lower rate of landfill tax will remain frozen at £2.50 per tonne in 2013–14.”

However, the Budget does set out plans to reduce the contributions which landfill operators can make to environmental bodies under the Landfill Communities Fund. At present, operators can contribute 6.2% of their landfill tax liability but this is not to be reduced to 5.6%.

The Budget states: “The value of the landfill communities fund for 2012–13 will remain unchanged at £78.1 million. As a result, the cap on contributions by landfill operators will be amended to 5.6 per cent. Future decisions on the value of the fund will take into account the level of unspent funds held by environmental bodies.”

* Plans to rationalise environmental regulations relating to waste transfer notes, WEEE and hazardous waste as set out by Defra earlier this week (see letsrecycle.com story).
* Plans to correct landfill tax legislation in relation to the definition of a landfill site in Scotland to align it with the rest of the UK.
* Energy used in certain metal recycling processes will be liable to a reduced rate of 20% of the main rates from 1 April 2012.
* Plans to consult on simplifying the CRC Energy Efficiency Scheme to reduce administrative burdens on business. Should very significant administrative savings not be deliverable, the Government will bring forward proposals in autumn 2012 to replace CRC revenues with an alternative environmental tax.
* Plans to reduce the main rate of corporation tax by an additional 1% from April 2012. The rate will therefore fall by two per cent, from 26% to 24% in April 2012, to 23% in April 2013 and to 22% in April 2014.
* Confirmation of plans to scrap or improve 84% of Health and Safety regulation.

Initial reaction to the Budget came from the Environmental Services Association (ESA) which welcomed the emphasis on infrastructure.

Matthew Farrow, ESA’s director of policy, said: “The Chancellor’s emphasis on the role of infrastructure investment in driving growth and jobs was welcome, as the waste and resources industry has the potential to invest over £10bn in new infrastructure over the coming years. But we would have liked to see specific ‘green infrastructure allowances’ to incentivise investment in the sector as the loss of industrial building allowances has made some potential waste management investment less economically viable.”

Author plasticsinfomart 38
The report provides an extensive analysis of the factors that drive as well as restrain the growth of the world Industrial Automotive Robots market....
Read More