In the front of the line is the Herbold wet shredder HGM: water is added at the beginning of the pre-size reduction step. The advantages, according to the company, are less wear and tear, no plastification due to the optimum cooling during the size reduction process, and effective separation from the first processing step. 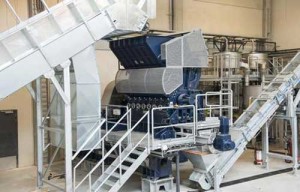 The Herbold Wet Shredder, inside equipped with exchangeable wear plates, shreds the infeed material by the simultaneous addition of wash water. The coarsest impurities are already washed off during the first process step.

This technique is suited for highly contaminated material such as agricultural film. It is also suitable for post-consumer film from households and wet granulation has significantly increased the life between knife changes enabling a more economic operation.

Even problematic material such as wood and paper fractions inside the input material can be handled better through the wet shredding as water allows for liberation from the material early on in the process, explained Herbold.

Further developments such as pre-washing units, granulators with forced feeding, hot wash steps with ultrafiltration and hydro cyclone separation steps reduce energy costs, fresh water and energy consumption and increase at the same time the quality of the final product.

Both process steps reduce the wear and maintenance costs not only for the first step in comparison to a dry process but also for the following process steps in a washing line, the company explained.

The washing line itself is no longer contaminated by extreme impurities, hence the components have a longer operating time and the final product quality improves.

IFAT 2016, the international trade fair for water, sewage, waste and raw materials management, will be held from May 30 to June 3 in Munich, Germany.