Chasing future trends appeared to be the prevailing trend of DuPont’s presentation at CHINAPLAS’s media day, as the performance plastics leader’s Asian business decision-makers set out the big announcements the company is making at the world’s second-largest plastics show.

The turbocharged 1.5 litre 3-cylinder petrol engine of BMW’s revolutionary i8 plug-in hybrid sports car is equipped with a sound modelling resonator made of DuPont’s high temperature- and chemical-resistant Zytel PLUS polyamide resin. 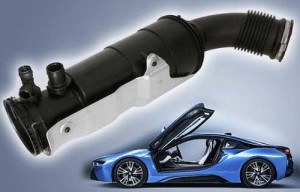 The role of performance plastics in packaging was the first topic of discussion, with Michael Chen taking to the podium to promote the role DuPont’ Vacuum Skin Packaging (VSP) and how China – a market with a growing demand for meat – could significantly prevent food waste.

A fully transparent packaging material with an emphasis on quality and hygiene encourages consumers to purchase the product, which facilitates a less bloody interior and prevents odour when opened and discarded unlike traditional packaging. Furthermore, VSP promises a longer shelf life and more efficient use of shelf space for retailers, as the product can be hung rather than stacked on shelves.

Chen then went on to discuss DuPont ELVALOY for improving the lifespan and processing of PVC – which is experiencing a resurgence at present. Carmakers are reintroducing PVC for automotive interiors for its design flexibility. ELVALOY achieves better anti-fogging, reduced volatiles and enhanced cold temperature flexibility to PVC, putting PVC back on the table for automotive interior design.

Automotive components under the hood

An all-plastic component was passed around demonstrating the metal replacement technology DuPont brings to automotive air duct and turbo charger hoses, promising 20 per cent savings in both costs and weight, with improved temperature and chemical resistance.

Vamac VMX 5000 brings even more performance plastics clout to the automotive market. The recently-launched material offers superior processing and advanced properties – including a working temperature performance of up to 190 degrees Celsius.

Due to its function, the resonator has a relatively large volume; however due to the newly optimised design, it weighs just 1.5 kg because the high stiffness and high strength grade of Zytel PLUS reduced the thinness of the resonator walls. Installed between the air filter and turbo charger in the rear of the i8, the resonator is part of the air management system of the sports car’s compact 1.5 litre 3-cylinder petrol engine.

The resonator was developed by close collaboration between BMW, DuPont Performance Materials and MANN+HUMMEL. DuPont Zytel PLUS enables the resonator to have long-term resistance to temperatures from -40°C to 190°C as well as hot engine gases and fluids.

DuPont has launched three new materials for consumer electronics promising end-products that are thinner, lighter and greener with cost and aesthetic advantages.

Zytel HTN FR55G55NHLW is a high temperature polyamide grade targeting metal replacement in laptop chassis frames one of which was passed around to demonstrate its extreme lightweightness and almost metal-like look and feel. Finally, Hytrel HTR 8813 copolyester thermoplastic elastomer was presented to the media, which enables laptop manufacture to be sleeker, lighter and less expensive by replacing the conventional metal hard disc brackets.

DuPont announced that it has collaborated with Philips Lighting to develop a new thermo-conductive (TC) resin especially designed for use in LED lamp housings. DuPont Zytel TC will be used in Philips Lighting’s common GU10 designation bi-pin connector LED lamp.

Simultaneously, with a breakdown voltage of 7 KV, the grade possesses the required electrical insulation properties to pass the relevant safety standards and ensure proper product safety during usage. The superior processability possessed by this new grade brings a high degree of design freedom to the equation as well.

“Even though this is an industry that has been around for a long time,” Philippe Hanck stated, “More than ever now performance polymers are relevant to today’s challenges.”