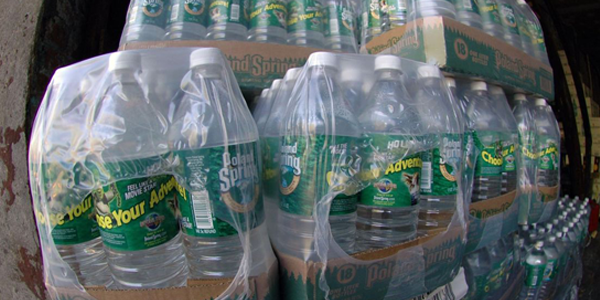 You may not be pooping bricks right now, but you may be pooping plastic.

A study presented at the 26th United European Gastroenterology (UEG) Week meeting in Austria suggests that there is now so much plastic bleep around us that it has now made its way into our bleep. Dr. Philipp Schwabl described how his team from the Medical University of Vienna and the Environment Agency Austria had 8 volunteers from different countries (e.g., Finland, Italy, Japan, the Netherlands, Poland, Russia, the UK, and Austria) keep a food diary for a week and then give the researchers samples of their stool.

I know what you are thinking, keeping a diary usually doesn’t involve a stool sample. But in this case, the researchers wanted to first determine how much plastic the volunteers may have been exposed to through their diets and then test their stool for 10 different types of plastics. The Environment Agency Austria performed the stool testing.

After the research team got their poop together, this is what they found. All of the volunteers had consumed food or beverages stored in plastic wrapping, bottles, or containers. Six of the 8 had eaten fish from the sea, not plastic fish but real fish. And the stool testing revealed up to nine different small (50 and 500 micrometers) particles of plastics, an average of 20 microplastic (less than 5 millimeters) particles per 10 grams of stool. The most common plastic particles were polypropylene (PP) and polyethylene terephthalate (PET).

Oh, poop. Does this mean that there is now so much plastic around us that it is hitting us right in our guts?

Granted, the study does have its limitations. It is only a pilot study, which doesn’t mean that all 8 volunteers flew planes. It means that the study included a small number of people and is meant to be a precursor to larger studies. Unless you are on a date, 8 people is not too many people. Having so few study subjects raises the possibility that there was something unusual about these people. Maybe they happened to be exposed to more plastic than the average person and munch on credit cards. Maybe the researchers caught them on a bad a week, when they happened to be having more plastic. Maybe the diary keeping or the testing was off, because no measures or tests are perfect.

Regardless, these findings are not that surprising. Plastic is now everywhere, not just on or in Hollywood actors. Indeed, a study published in the journal Environmental Pollution on…you guessed it…environmental pollution estimated that “between 3 and 23 billion (an average of 13 billion) of these microplastic particles are being released into US waterways every day via municipal wastewater.” As indicated in an article published in the journal Science, marine biologists have found such microplastics in every ocean and in fish and other sea animals, who inadvertently eat and collect microplastics in their bodies. Thus, if you eat fish, you may also be eating microplastics.

But that’s not the only way microplastics can make it into you. Small plastic particles may separate from plastic wrapping, plastic bottles, plastic containers, plastic utensils, or any plastic in machinery used to process your food. Also, what else have you been putting in your mouth throughout the day? Actually, don’t tell me the answer that question but think quietly about how many of these things are plastic, have touched plastic, or are plastic adjacent. The New Radicals may have claimed that, “you’ve got the music in you,” but most likely you also have plastic.

Why should you give a poop, about microplastics in your stool? Eating microplastics isn’t simply bedazzling the insides of your intestines. For example, evidence suggests that consuming these bits of plastic can harm animals such as inhibit oyster reproduction as reported in the Proceedings of the National Academy of Science (PNAS). Of course, oyster sex isn’t quite human sex, unless you are doing something really weird. Nonetheless, seeing what microplastics can do to other animals raises concerns about what they can do to human. Could microplastics be damaging your gut lining and even making their way into your bloodstream through the walls of your intestines? What havoc could they playing with the normal functioning of your intestines, their immune system structures, and their microbiome? Oh, and before you discount your intestines as just a poop chute, realize that your gut plays important roles in metabolism and protecting your body against toxic materials and pathogens such as viruses and bacteria. Your stool may be messy, but don’t mess with your intestines.

I’ve been in the worlds of business, medicine, and global and public health. And these worlds are a lot more similar and different than you think. Currently, I am an Associate Professor of International Health at the Johns Hopkins Bloomberg School of Public Health, Executive…