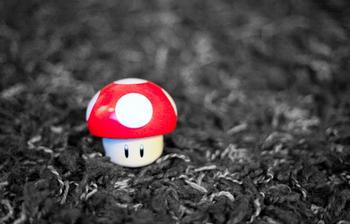 Polyurethane seemed like it couldn’t interact with the earth’s normal processes of breaking down and recycling material. That’s just because it hadn’t met the right mushroom yet.

The Amazon is home to more species than almost anywhere else on earth. One of them, carried home recently by a group from Yale University, appears to be quite happy eating plastic in airless landfills.

The group of students, part of Yale’s annual Rainforest Expedition and Laboratory with molecular biochemistry professor Scott Strobel, ventured to the jungles of Ecuador. The mission was to allow “students to experience the scientific inquiry process in a comprehensive and creative way.” The group searched for plants, and then cultured the microorganisms within the plant tissue. As it turns out, they brought back a fungus new to science with a voracious appetite for a global waste problem: polyurethane.

The common plastic is used for everything from garden hoses to shoes and truck seats. Once it gets into the trash stream, it persists for generations. Anyone alive today is assured that their old garden hoses and other polyurethane trash will still be here to greet his or her great, great grandchildren. Unless something eats it.

The fungi, Pestalotiopsis microspora, is the first anyone has found to survive on a steady diet of polyurethane alone and–even more surprising–do this in an anaerobic (oxygen-free) environment that is close to the condition at the bottom of a landfill.

Student Pria Anand recorded the microbe’s remarkable behavior and Jonathan Russell isolated the enzymes that allow the organism to degrade plastic as its food source. The Yale team published their findings in the journal Applied and Environmental Microbiology late last year concluding the microbe is “a promising source of biodiversity from which to screen for metabolic properties useful for bioremediation.” In the future, our trash compactors may simply be giant fields of voracious fungi.

Author plasticsinfomart 138
Technology for a sustainable economy Held on 19 and 20 February, ICMA SAN GIORGIO open house was a success. The event dedicated to the...
Read More

Author plasticsinfomart 382
We cordially invite you to meet us at the formnext trade show from 16 to 19November 2021 in Frankfurt a. M., Germany at ARBURG...
Read More