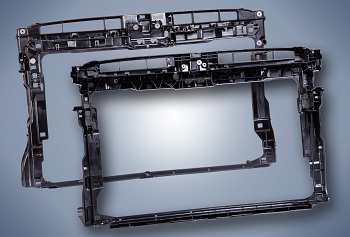 The front end carrier in the new Golf 7 is completely made from plastic. This is reportedly the first without metal reinforcement and was developed with extensive CAE and simulation work.Replacing the previous polypropylene hybrid part with an all-plastic part required use of not only an engineering plastic in the form of Ultramid B3WG8 (a highly reinforced polyamide) but according to resin supplier BASF (Ludwigshafen, Germany) its Ultrasim simulation tool during development.

The sheet steel parts that had been attached previously are now eliminated. This reduces the weight of the front end module significantly compared to that of the predecessor model, saving assembly time and thus costs. Volkswagen produces the part in-house. In addition to limited space for installation, requirements of the all-plastic part include a variety of very challenging load cases: among them, static and dynamic hood latch failure, where incorrect opening and closing of the engine’s hood is simulated and tested under the harshest conditions. At the same time, the stiffness and vibration behavior of the system comprising front end and radiator was based on CAE analyses and validated in an actual vibration test.

Special attention was devoted to the crash sensors attached to the front end. They ensure deployment of the airbag at the right moment in the event of a head-on collision. For this, the plastic part must exhibit a certain dynamic stiffness at a defined location and satisfy the automaker’s crash acceleration requirements. In a real-world test, the vibration response of the part corresponded exactly to what was designed and predicted by Ultrasim: The Ultramid front end carrier transmits the collision signal correctly.

The primary load cases provide the basis for a front end design; from these, an optimized topology can be derived. This topology gives the designer valuable information regarding the final shape of the part. Thanks to the highly accurate predictions of Ultrasim, only slight modifications were needed in moving from the prototype of the front end carrier to its serial production.

This demonstrates the kind of challenging applications that can be addressed by combining a suitable material with the correct prediction and calculation tools. Furthermore, Ultrasim, together with its special failure models, can be integrated seamlessly into the calculation environment for the automaker’s entire vehicle. This requires, however, that very specific data, for example crash-relevant material data for the plastic, be available which describe exactly the effect of temperature, moisture and rate of load application. A simulation is thus preceded by acquisition of extensive material data from experiments conducted with the aid of complex testing and measuring instruments. The simulation tool is then able to predict failure behavior, strain rate dependence, and even tension-compression asymmetry as a function of fiber orientation.