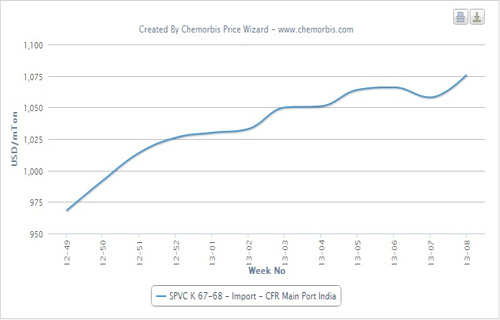 October announcements of PVC offers from major Asian suppliers were heard this week across Asia as per ChemOrbis. The new offer levels indicate slight increases to India while the rest of the region, including China and Southeast Asian countries, received stable prices from the producers.

Price increases were pioneered by a domestic producer in India early in the week. A producer source pointed to the expectations of seeing an improvement in demand following the end of the monsoon season in the country. Plus, a maintenance shutdown to be held in early October played a role in their move to raise their offers to the domestic market.

This was followed by a South Korean producer, who slightly raised its import offers to India before waiting to hear the new announcement of a Taiwanese major. A source from the producer commented, “Our allocation will be limited next month due to a shutdown at one of our PVC lines.”

Offers from a Taiwanese major followed suit as they approached the Indian market with a small hike request. “The end of the monsoon season will revive the buying interest in India. We expect buyers to return to the market for stock replenishment as their stocks must have diminished. Plus, our allocation is less than normal this month given the maintenance shutdown during November and December at our plant,” said a source from a Taiwanese major.

While the Indian market is facing higher offers for October, the Taiwanese major rolled over its PVC prices to China and Southeast Asia.

According to ChemOrbis, many players both in China and Southeast Asia concur that demand is not strong enough to support any firming in the midst of thin demand and high stocks inside China. “An improvement in demand in India is not enough to drive prices higher all across the region,” commented a player.