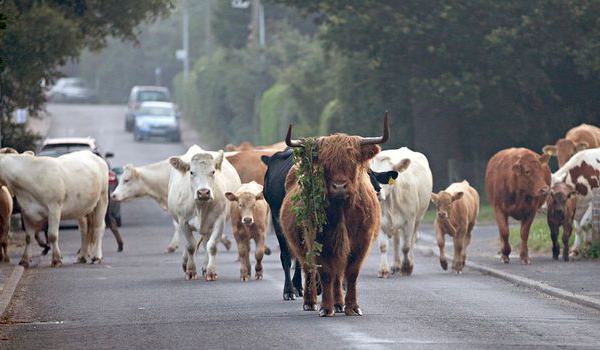 AHMEDABAD: In Gujarat where the brutal flogging of Dalits in Una for alleged killing of cows triggered a massive controversy, a fellow Dalit, Natubhai Parmar, 40, has put up a permanent exhibition on gau raksha albeit from plastic.
On the road leading to Wadhvan town off Ahmedabad-Gandhidham highway, Parmar’s exhibition is an installation of sorts highlighted by a cow prototype with its stomach exposed, intestines choked with plastic. To complete the gory picture, swathes of blood and fluid soaked plastic, removed by the kilos from the dead bovines during cow skinning is hung on bamboo rods.
Parmar says his exhibition, put up with dead cows being skinned at the rear, aims to raise a stench, literally and figuratively, to open eyes of people and administration on how plastic is killing cows in the state. The huge quantities of plastic hung was extricated from just a dozen-odd dead cows in Surendranagar.
“One may find it surprising but nearly 70-80 kg plastic is extracted from the intestines of just one cow,” he said.
The exhibition is an installation highlighted by a cow prototype with its stomach exposed, its intestines choked with plastic
‘Govt should frame laws for saving grazing land for cows’
Natubhai Parmar, an excow skinner who now rents DJ music system for marriages for a living, says, “Grazing land is fast disappearing in Gujarat due to rampant illegal encroachments. In nearly 3,000 villages, there is no pastoral land at all. Consequently, cow grazers are forced to leave bovines free to feed on stray garbage which primarily includes plastic in the form of plastic bags and pouches.”
Parmar launched his exhibition campaign to save ‘mother cow’ on December 12, 2017, to commemorate his father’s death anniversary.
The location adjacent to Ahmedabad-Gandhidham highway was consciously chosen to grab maximum eyeballs on the busy highway. “People get curious due to queer cow replica and inquire about the stench. This is how they are led to my exhibition and get the message,” said Parmar.
Besides this permanent display, Parmar also converts it into a mobile exhibition taking it to numerous places and events including the famed Tarnetar fair and Junagadh’s Girnar Parikrama, both annual events which witness lakhs of people in attendance.
Mahesh Rathod, a resident of Wadhwan, said he found the exhibition’s sight and stench repulsive but the cause is noble. “The government should frame laws to stop plastic dumping and save grazing land to save cows,” said Rathod.