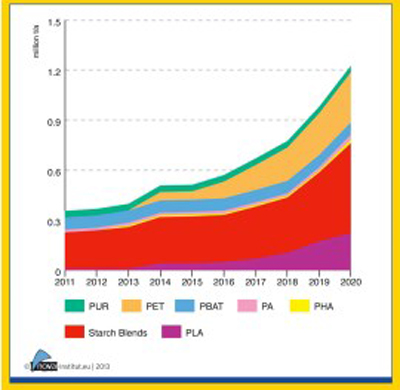 A market study published by the nova-Institute says the production capacities for bio-based polymers in Europe will be boosted by new developments and investments in the near future.

The “Bio-based Polymers Producer Database” shows that Europe’s situation in producing bio-based polymers is limited to just a few polymers. Europe has so far established a solid position mainly in the field of starch blends (blends of polymers with native starch or thermoplastic starch) and it is expected to remain strong in this sector for the next few years.

Nevertheless, new developments and investments are foreseen in Europe: some years after the installation of industrial scale polylactic acid (PLA) capacities in North America and Asia, the first European industrial-scale PLA plant is scheduled to become operational in 2014.

Polyethylene terephthalate (PET) production is growing worldwide, largely due to the Plant PET Technology Collaborative (PTC) initiative, whose global value chain development will lead to the introduction of future production facilities in Europe by 2015, says nova-Institute.

One noteworthy finding is that Europe shows the strongest demand for bio-based polymers, while production tends to take place elsewhere, mainly in Asia and South America. The bio-based polymer production facilities for PLA and polyhydroxyl alkanoates (PHA) located in Europe are currently rather small, and although there are next to no production capacity figures for the latter, several pilot plants are already operating.

On the other hand, bio-based polyurethane resin (PUR) and polyamide (PA) production has gradually taken off in Europe and is likely to remain stable in order to supply the growing markets on the building and construction and automotive sectors.

Europe does host industrial production facilities for polybutylene adipate-co-terephthalate (PBAT). Although still fully fossil-based, PBAT is expected to be increasingly bio-based reaching shares of 50% by 2020, to judge by industry announcements and the capacity development of its bio-based precursors.

Also for polybutylene terephthalate (PBT) recent developments in the production of bio-based 1.4 butanediol (BDO) have proven that the bio-based route to the polymer is commercially feasible and its production is planned to have started by 2020, the study reveals.

With leading chemical corporations, Europe has a particular strength and great potential in the fields of high-value fine chemicals and building blocks for the production of PA, PUR and thermosets among others. However, only few specific, large-scale plans for bio-based building blocks with concrete plans for the production of bio-based polymers have been announced to date.

The European Union (EU)’s relatively weak position in the production of bio-based polymers is largely the consequence of an unfavorable political framework, according to nova-Institute. In contrast to biofuels, there is no European policy framework to support bio-based polymers, whereas biofuels receive strong and ongoing support during commercial production (quotas, tax incentives, green electricity regulations and market introduction programs, etc.).

Without comparable support, bio-based chemicals and polymers will suffer further from under investment by the private sector. It is currently much more attractive and safe to invest in bio-based polymers in Asia, South America and North America.