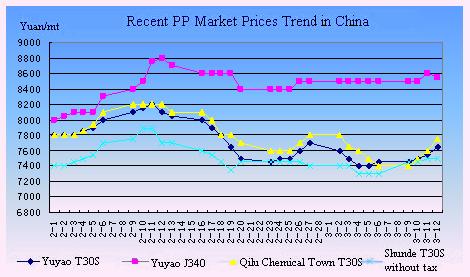 PP prices are stable to firmer in China this week on the strength of rising spot propylene prices and stronger energy costs, as per the pricing service of ChemOrbis.  Overseas producers are expressing their September sell ideas with rollovers to increases while domestic producers lifted their prices in accordance with firmer costs as well as their comfortable inventory levels.

A source at Southeast Asian producer commented, “We left our prices unchanged this week after announcing $30-50/ton increases on our September prices last week.  We have not managed to conclude many deals yet as most buyers are placing their September bids with smaller increases of $10-30/ton and we are not willing to give any discounts given stronger upstream costs and rising prices in the domestic market.”

A source at a South Korean producer added, “We are planning to announce higher prices for September but have not decided on a definite increase amount yet.”  A trader based in Shantou stated, “Our Saudi Arabian supplier informed us that they are planning to seek $40/ton increases for September.  We raised our prices to the local market this week in anticipation of facing higher replacement costs in the coming weeks.”

Domestic prices posted increases of CNY100-200/ton ($16-31/ton) this week on the back of higher offers from Chinese producers.  “We lifted our PP prices by CNY50-150/ton ($8-24/ton) at the start of this week in accordance with our comfortable inventory levels as well other domestic producers’ price hikes,” a producer source told ChemOrbis. A distributor in Cixi stated, “We believe that domestic prices will remain firm over the short term as local availability is limited and this will encourage producers to take a firm stance on their prices.

However, we think that prices will not see any major increases in the coming week as buyers are offering resistance to higher offer levels.”  A converter manufacturing plastic containers commented, “We purchased some domestic homo-PP injection with CNY100-200/ton ($16-31/ton) increases this week and we believe that prices will remain firm over the short term.”

Significantly lower propylene feedstock costs in the US may encourage a greater volume of American PP exports to China and help to balance out the supply limitations seen inside the Chinese market.  A trader offering American homo-PP prices to China near the average of the current import ranges commented, “Buyers are offering some resistance to our current prices and we are willing to negotiate with our customers in order to speed up our sales.”

Author plasticsinfomart 85
Oil prices are always experiencinga little fluctuation. In the past few years, there have quite a few sudden rises in oil prices with a...
Read More