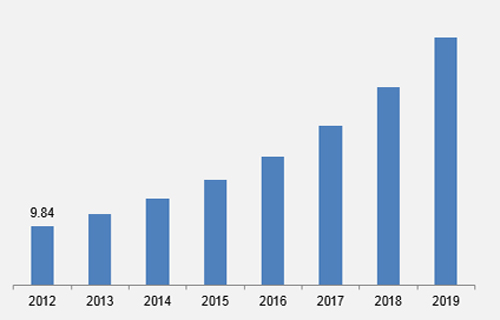 “In total, the European plastics market reached a volume of more than 53 million tonnes in 2014,” says Oliver Kutsch, CEO of Ceresana. “Over the next eight years, we expect revenues to rise further at an average rate of 2.9% pa. In 2022, they will amount to about €104 billion.” These figures do not include synthetic fibers, paints, adhesives.

Having a market share of almost 24%, Germany is the largest manufacturer of plastics in Europe. Belgium ranks second, followed by France, Russia, the Netherlands, and Spain. The most important application areas for plastics in 2014 were flexible packaging, rigid packaging and the construction industry. Those three areas are currently representing about 70% of the total demand for plastics in Europe. Other sales markets, however, are recording the highest growth rates of more than 2% pa. These are transportation and the electrics and electronics industry.

Flexible packaging such as packaging films, bags and sacks as well as shrink and stretch films are mainly used for food packaging, but also as secondary and tertiary packaging, for example for transportation. These application areas are dominated by the polyethylene types LDPE and LLDPE that account for almost 53%, followed by polypropylene and the High Density Polyethylene (HDPE). The amount of rigid packaging products such as cups, trays, bottles, boxes and lids completely made of plastics is rising more and more. In Europe, mainly PET is used in the manufacturing process, followed by polypropylene and HDPE. As the weight reduction of materials has reached its limits, more and more plastic bags are used in the area of beverages as an alternative to rigid packaging.

The sales market construction industry includes all plastic products for building construction and civil engineering, such as films, cables, tubes, profiles and coverings, sheets and pipes, dowels, screws, glazing, mounting elements, coatings, and membranes. In 2014, the largest demand in this area was recorded for PVC. The construction sector consumed more than 5.5 million tonnes of PVC. HDPE was in second place, followed by polystyrene and EPS.