Shanghai— DuPont Performance Materials will launch its newest plant in Shenzhen, China, at the end of June. 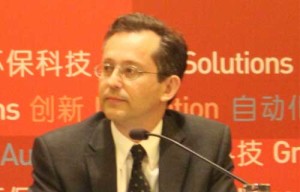 “In the new facility we will use new extruder machinery that will bring all kinds of benefits to us and improvements to our manufacturing,” said Philippe Hanck, the company’s Asia-Pacific business director, at a news conference in advance of Chinplas in Shanghai.

Wilmington, Del.-based DuPont currently has eight manufacturing sites in the Asia Pacific region. The Apollo plant will replace an existing plant, which will shut down.

Hanck said the new plant will be DuPont’s largest compounding plant globally. The first phase of construction is quite large, he said, and “there will be a lot of space for further expansion.”

He added that while the economic slowdown in China is a reality, the ‘new normal’ has had less impact than what might be expected.

“Our growth is not necessary directly linked to the growth rate of the industry. There is more and more high-quality packaging in China. So even though the total packaging [may be affected], the kind of packaging we do has very high growth rate.”

He added that in the automobile sector, the growth of turbocharged engines is tremendous.

The new plant will have a large impact, he said.

“China represents at least half of the volume in this region,” he said, although he pointed out that some of the production in China is to serve global customers from Germany, Japan and the United States.

The company also has a 33,000-square-meter China research and development center located alongside its Shanghai innovation center, which recently added an injection molding press with 450 metric tons of clamping force.