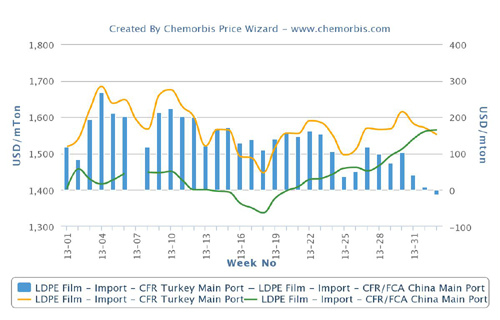 In Italy, the firming trend in the PE market has been in place since late February because of persistently tight supply stemming from several force majeure announcements and outages in the region. Since the beginning of March, LDPE prices have posted three digit hikes of €300-350/ton in Italy’s spot market, based on average ChemOrbis Price Index.

Stronger prices in Italy’s LDPE market caused the delta between Italy and Turkey to reach a year high of $200/ton on average recently, according to ChemOrbis Price Wizard. The constant upward momentum and the year-high premium that Italy carries over Turkey also pushed Middle Eastern producers to shift their offers to Europe in order to benefit from better margins.

Players in Italy reported receiving several offers on an import basis in the midst of critical supply issues, particularly for HDPE and LLDPE. “Nevertheless, buyers are taking a cautious stance towards fresh purchases nowadays and buy only when they really need material,” said a trader who raised LDPE prices by €150/ton and HDPE and LLDPE by €200/ton.

A compound manufacturer in Italy also reported receiving offers for Far Eastern and Middle Eastern LLDPE and HDPE cargoes at prices which are €80/ton below the offers he got from his regular supplier.
Turkish LDPE also showed up in Italy’s spot market this week at levels coming close to the low end of the overall local range.

In Turkey, meanwhile, PE prices have risen considerably as well with players generally concurring that supply levels are still limited; however, supply limitations are being offset by discouraging demand stemming from upcoming elections and the fluctuations in the USD/TL parity, according to ChemOrbis.

The fact that the PE market slowed in China this week has also started to exert some pressure on Middle Eastern offers to Turkey based on theoretical netback calculations.