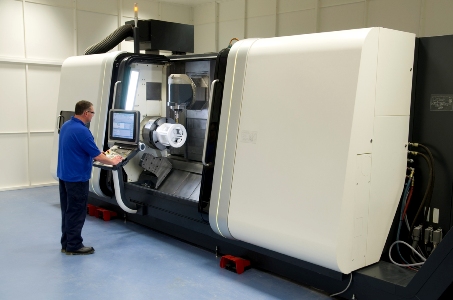 In a move to enable the company to machine larger and more complex plastic parts to high levels of precision, dalau has added a new DMG machine, programmed with Delcam’s FeatureCAM feature-based CAM system, and a Hexagon inspection arm using PowerINSPECT inspection software.

Founded as a family business in 1955, dalau, which is based in Clacton-on-Sea, has grown to become the largest processor of polytetrafluoroethylene (PTFE) in the UK. It has subsidiaries in New Hampshire USA, and in Turkheim, Germany, and recently opened a factory in Suzhou China, to supply 35 countries around the world.

The company has always focused on challenging applications for its materials. In the early 1970s, it supplied over 100 slide pads for the Sydney Opera House to sit on, allowing the building to move during the tidal movements from summer to winter. Another critical application was a BP contract to supply PTFE sliding pads to a new ultra-deep-water offshore floating oil rig of the coast of Angola.

More recently dalau products have been specified for some of the world’s most prestigious projects across a diverse range of industrial sectors. The company manufactures parts for Formula 1 racing cars and has been given AS 9100 approval to produce components for the new Airbus 380 and the Eurofighter. It also machines hi-tech miniature components for electronic applications, using the latest technology in micro-machining.

“We started out machining small parts, about 25mm at the largest, on a sliding-head auto-lathe,” remembered Philip Alston, Production Manager for Machined Components at dalau. “Most of those designs were relatively simple turned parts”.

“As our customers started to demand larger and more complex designs, we realised that we would need to move to five-axis milling to remain competitive. I first saw Delcam’s software when I visited a company in Coventry to evaluate a five-axis machine we were thinking about buying. The user there was full of enthusiasm for both the Delcam programs and the company. Eventually, we decided on a Cincinnati machine, which also came with a recommendation to use Delcam software for programming.”

“I visited Delcam in Birmingham for an in-depth demonstration soon after and was really impressed with how easy the operator made the software look. Of course, it wasn’t as simple for us at first because all our expertise was in turning rather than milling but, with the help of Delcam’s support team, we were soon taking full advantage of the software.”

“PowerSHAPE has been a real bonus as our design capabilities were limited before we had 3D software. Even though we try to get 3D models from our customers as often as possible, we still use PowerSHAPE to develop some designs from drawings. PowerMILL has also made a big contribution in making the most of our five-axis machine.”

Most recently, dalau has increased its capabilities with a DMG CTX Gamma 2000 TC, the first machine of its type to be installed in the UK. This incorporates a combination milling and turning spindle, with an NC-controlled B-axis to enable the production of even larger and more complex designs. The new DMG is housed in a fully-enclosed, temperature-controlled room, together with the inspection arm, allowing final inspection on the machine.

“Since we first added PowerSHAPE and PowerMILL, I’ve never really thought about looking at any software other than Delcam,” said Mr. Alston. “When we added to new machine and the inspection arm, Delcam’s FeatureCAM and PowerINSPECT software were easy choices to make.”

Middle Eastern producers revise down PE prices in the Mediterranean

Author plasticsinfomart 135
The Terwin 2000 series transducers have been designed to meet the most exacting requirements in modern day extrusion technology. Fitted with the unique Di-Hard™...
Read More