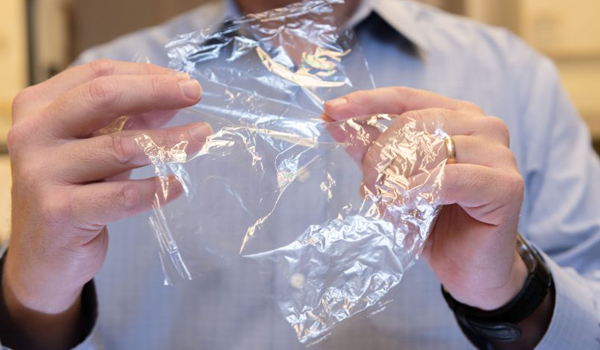 Researchers at the Georgia Institute of Technology have developed a material from two naturally-occurring polymers that could offer an environmentally-friendly alternative to traditional plastic packaging for food and consumer goods. The material is made by layering cellulose — the most abundant biopolymer on Earth — with chitin, which is widely found in shellfish, insects and fungi.

The research team, led by Carson Meredith, created films from the two biopolymers by suspending cellulose nanocrystals (CNCs) and chitin nanofibres (ChNFs) — which are negatively and positively charged, respectively — in water, and then spraying them onto a compostable substrate in alternating layers. The processing technique is compatible with roll-to-roll coating.

67% reduction in oxygen permeability
Meredith and colleagues found that the material shows up to a 67% reduction in oxygen permeability compared to some forms of polyethylene (PET), which is one of the most common plastics employed in transparent food packaging today. This improvement comes from the crystalline structure of the nanofibres and means that it could, in theory, keep foods fresher for longer, say the researchers. The most impermeable composites were the ones that were made of three alternating layers of ChNF-CNC-ChNF).

“It’s difficult for a gas molecule to penetrate a solid crystal, because it has to disrupt the crystal structure,” says Meredith. “Something like PET on the other hand has a significant amount of amorphous or non-crystalline content, so there are more paths and it is easier for a small gas molecule to find its way through.”

Scaling up
It is not all plain sailing though, and the researchers say that they now need to develop a scaled-up manufacturing process so that their film is cost competitive with traditional packaging materials. “What is more, while industrial processes to mass produce cellulose are mature, methods to produce chitin are still in their infancy,” explains Meredith. “And, more research is also needed to improve the material’s ability to block water vapour.

Another important point: “Ground, coarse powders, of cellulose and chitin have a generally-recognized as safe (GRAS) status with the US Food and Drug Administration (FDA) and can be used as food additives,” he tells Physics World. “However, some have asked whether a material derived from shellfish would cause allergies in shellfish-sensitive people. In the packaging we propose, a typical shellfish allergy response is unlikely because the chitin is so highly purified. However, the question of whether purified chitin or cellulose fibres could be released from the packaging and induce their own allergy response should be addressed.”