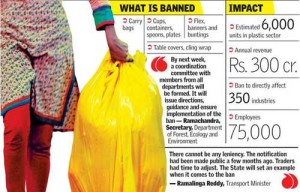 Producers worry about their future as officials are expected to ‘strictly’ enforce the ban from Monday; citizens looking for alternatives

Despite a ban coming into force on Friday, plastic bags were freely available on the weekend across the city highlighting the enormous task before the government machinery to enforce the rule. The ban on plastic covers everyday items like forks, spoons, cups and plates.

However, a trader said, “After the notification, it is becoming difficult to sell plastic products … raids by civic authorities began as soon the draft notification was made public.”

However, ‘strict’ enforcement of the ban is expected to begin on Monday.

KSPCB Chairman Lakshman says, “There will be no leniency because manufacturers knew about the rules over the past few months.”

At the busy Russel Market, traders have started the process of doing away with plastic. Mohammad Idres, General Secretary of the Russel Market Traders’ Association, says, “We will ensure that all shopkeepers use either cloth or paper bags within a fortnight.”

Suresh Sagar, Honorary Secretary of the Karnataka State Plastic Association, has said there is no option but to move court.

He believed that more than 350 plastic units would be directly affected, a majority are small-scale industries. “The machines cannot be used for anything else. Investments of Rs. 60 lakhs have been made after taking loans. How will they repay? The draft rules of the Central government proposed banning all plastic bags less than 50 microns. Why can’t the State government follow this instead of a blanket ban?”

The Canara Plastic Manufacturers & Traders Association is similarly ‘worried’. “We will first try to get a solution through the government,” said B.A. Nazeer, president of the Association.