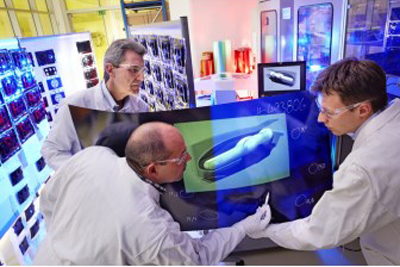 As an automotive interior concept of the future, Bayer MaterialScience will show 3D displays with homogeneous, fully customizable surfaces and a razor-sharp display made with its special Makrofol RP polycarbonate (PC) films at K 2013.

RP stands for Rear Projection, which “enables brilliant image reproduction in High Definition (HD) quality”, according to Oliver Bruns, Head of Marketing for Functional Films at Bayer in Europe, the Middle East, Africa and Latin America. “They can be shaped using conventional film processing methods and present engineers with considerable design freedom, even for large components.”

Makrofol RP films are also scratch-resistant and can be equipped with any kind of surface, from transparent to black and from shiny to matt, according to Bayer. The company is currently developing products for touchscreen applications that are resistant to sweat, cleaning agents and chemicals even when these come into frequent contact with screens.

Based on the Black Panel technology developed a few years ago, drivers see a matt black surface when the screen is turned off. When switched on, the displays are activated, and show only the information the driver has selected. The finished components have a modular design which means they can be built in anywhere inside the vehicle, e.g. in the dashboard, in central consoles and in door trims, notes Bayer.

An interactive media table made with Makrofol RP will be shown at K 2013. A seamless user interface and illumination of the media table are achieved using rear projection technology. Thanks to special sensors, the interactive displays react to visitors’ gestures, allowing them to explore the contents presented there in a playful way.

Bayer adds that the computer and electronics industry and many other sectors working with optical displays could also benefit from this technology.