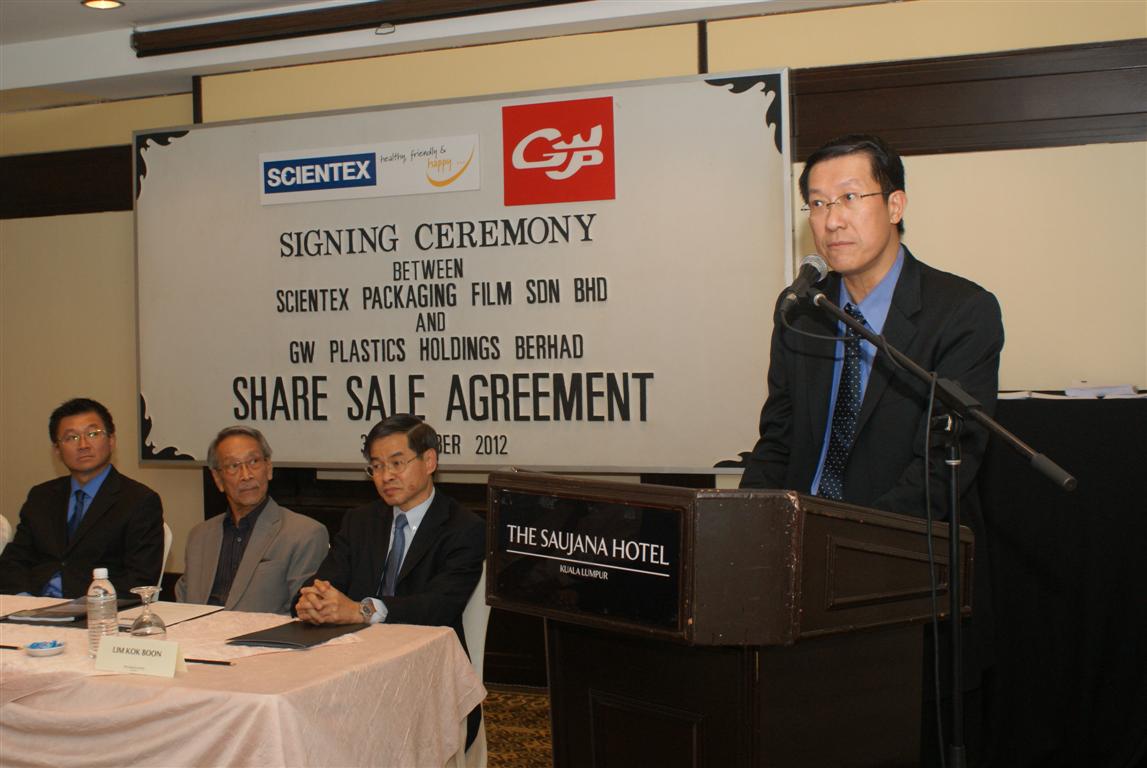 Malaysian plastics processor Scientex Berhad has proposed to acquire the core businesses of GW Plastics Holdings Berhad (GW) for RM 283.2 million (USD 92.7 million) in a deal the company said will create one of the world’s largest plastic packaging players.

The acquisitions are slated for completion by the first quarter of 2013. Scientex said it will enlarge the company’s industrial cast film production capacity to 154,000 tonnes/yr from 120,000 tonnes/yr. This move will also allow Scientex to gain entry into the global food and beverage (F&B) market segment via GWP’s blown film and downstream printing and lamination facilities, the company stated in a news release. Scientex Managing Director Lim Peng Jin said the planned directions of both companies will remain unchanged.

“The enlarged entity will see approximately RM 1 billion (USD 327.3 million) in sales, which effectively makes us one of the largest manufacturers and exporters of plastic packaging products in the world,” he said. “It will also be earnings-enhancing – allowing the post-acquisition enlarged entity to benefit from cost savings as a result of economies of scale, in terms of operations and administrative efficiencies as well as in the procurement of raw materials.”

Scientex has a cast stretch film facility in Pulau Indah, Selangor, which currently has nine production lines. The group is in the midst of extending the plant and the number of lines that will lead to an annual production capacity of 150,000 tonnes by the second half of 2013. It has also acquired adjacent land for future expansion.

At present, GW has an annual production capacity of 28,000 tonnes of blown film and 34,000 tonnes cast stretch film. Both its facilities are located in Rawang, Selangor, which has space for expansion since the company owns a parcel of industrial land measuring 28 acres. The group is currently in the midst of adding 10,000 tonnes to its cast stretch film production capacity as well as adding other converting lines for its blown film operations.

With the expansion plans in place by both Scientex and GW Plastics respectively, and on the basis of the completion of the acquisitions, the combined group should see sales of plastic packaging topping more than RM 1 billion (USD 327.3 million) going forward, Scientex stated. Jin said the deal was a “win-win” scenario for both GW Plastics and Scientex.

“It not only creates shareholder value for GW Plastics’ shareholders in potential capital appreciation, but also marks Scientex’s strategic expansion into the downstream value chain,” he said. “With this proposed acquisition, we are now able to make the big leap into the more lucrative and resilient F&B market and are able to tap into GW Plastics’ strong regional presence in this sector.”

Green Matter: Is whey the way to go?