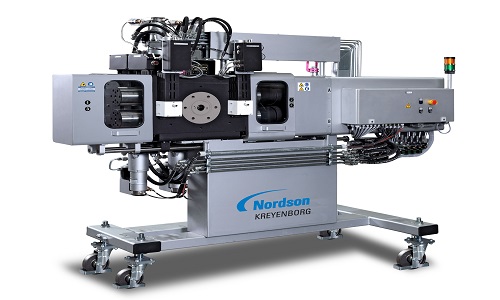 MÜNSTER, GERMANY, November 25, 2014: The contaminants inevitably found in post-consumer plastics place a heavy burden on the melt filtration equipment in recycling lines and can force operators to spend much time and effort simply changing filter screens. For a European company specializing in polyethylene recycling, the solution was to switch from conventional slide-plate screen changers to an automatically self-cleaning system.

The recycling company has installed such systems in two recycling lines that transform post-consumer polyethylene into pellets used for blown-film production of trash bags. The company replaced two 300-mm slide plate screen changers with 200 mm “V-Type” screen changers from Nordson Kreyenborg. Because the V-Type systems are automatically self-cleaning, screen changes are necessary only once a day—instead of every eight minutes with the old equipment.

The key to eliminating need for frequent screen changes is Nordson Kreyenborg’s “power backflush” technology. When contaminant buildup causes the differential pressure across the screen changer to reach a pre-set level, the backflush sequence begins automatically, with hydraulic pistons compressing some of the already filtered molten polymer and discharging it in reverse direction, back through the screen, to carry away contaminant for removal from the system. The V-Type screen changer purges even heavy contaminant from the melt filter element while maintaining extrusion throughput, minimizing operator intervention, and avoiding downtime.

In Nordson Kreyenborg’s V-Type screen changer, melt flow from the extruder splits into four streams for filtration in two pairs of screen cavities, then the streams rejoin with no significant change in melt flow. Each pair of cavities is mounted in a piston which positions both cavities so that they can filter their respective melt streams, or removes one of them from the process to remove contaminant buildup by means of backflushing. In normal operation, polymer is flowing through all four cavities. While one of the cavities is changed, the other three remain in the process.

The process for changing screens is initiated when a pre-defined number of backflushes is reached. This triggers the outward movement of the screen-bearing piston so that the screen pack can be removed and a new filter element is put in its place. Three of the cavities remain in the process while a new screen pack is installed in the fourth.

Author plasticsinfomart 63
EUROMAP, the representing body of various European plastics and rubber machinery associations, made a forecast at a press conference at K2010 that EUROMAP member...
Read More