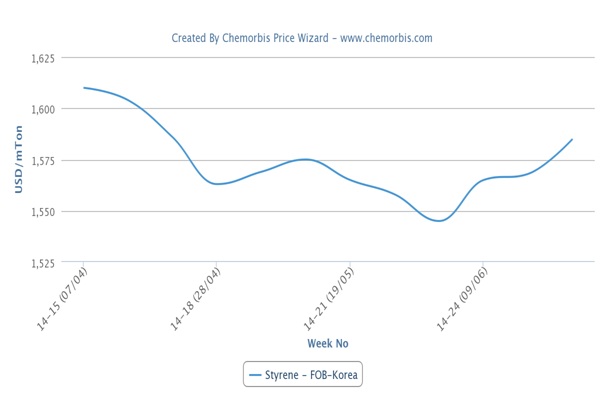 In Asia, styrene and ethylene prices have been firming up, while the increases on monomer prices are attributed to firmer production costs as well as tight supplies, especially for ethylene as per the pricing service of ChemOrbis.

Spot styrene prices gained ground on the back of bullish benzene costs. Spot prices were $45/ton firmer on the week on an FOB Korea basis while they were up $20/ton on a CFR China basis. Benzene prices, which gained around $45-50/ton over the same period due to firm oil and naphtha prices, played a role in these hikes in the styrene market. Spot naphtha closed last week at mostly steady levels, but prices were $35-40/ton firmer on a month over month basis.

In the ethylene market, spot prices moved up by $25/ton in Northeast Asia and escalated by $40/ton in Southeast Asia. Supplies were reported to be tighter in the region, especially for cargoes coming from Japan and South Korea, with players commenting that supply tightness prompted the recent hikes.

According to ChemOrbis, in downstream markets, China’s PE market remained firm on the back of strong ethylene and naphtha costs. Players mostly anticipate further increases on July prices since high upstream costs have pushed some producers to cut down their operating rates in order to cope with rising costs. When looking at the PS market, a similar panorama is observed. Although overall PS demand is not that strong, prices continue to be supported by higher styrene and benzene costs.

Author plasticsinfomart 67
OPEC president Angola said the group’s goal was still to achieve $75 a barrel by the end of the year, echoing earlier comment by...
Read More