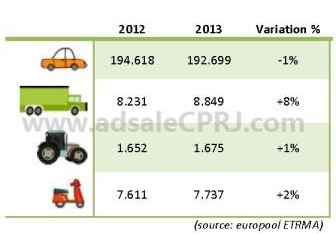 The European Tire and Rubber Manufacturers Association (ETRMA) published figures concerning its members’ sales in 2013, showing that there were timid signs of recovery that were consolidated towards the end of the year.

Despite the market have stabilized, ETRMA’s report showed that not all segments have enjoyed the same level of recovery. The Consumer’s tire segment is the one that had the worst performance and registered a -1% decrease in sales, compared to the already negative 2012. Country wise, the slump was evident in Germany, the biggest European market, and Poland. However, the association said that other major markets, such as France, Italy, the UK and Spain, have shown signs of recovery.

With regard to the truck and bus segment, the increase in sales has been more evident with an 8% growth compared to the previous year. “2012 had been a particularly bad year for this segment which lost 19% compared to 2011. The departure level was therefore very low and a return to growth was strongly hoped for,” explains Fazilet Cinaralp, Secretary General of ETRMA.

Trade data in these two segments confirms a domination of imports from China, which remain as high as 40% of total imports for consumer tires and are increasing significantly in the truck segment, the association noted. In general, imports are growing in all categories and especially in the truck segment, where they constitute about 20% of the total European market.

The Agricultural and motorcycle markets showed a stable performance compared to 2012 with a 1% and 2% growth, respectively. Yet, this stability only confirms the very low sales of 2012 and a full recovery is yet to be made for these two segments, explained ETRMA.

“2013 was clearly not a year of boom on the tire market, but sales data show a consolidation of the market and a return to growth after such a negative 2012. It is our hope that this trend will be confirmed by 2014, for which we could expect 2-3% growth,” summarizes Mrs Cinaralp.

Netstal focuses on Russia's packaging and beverage industry at Interplastica 2014

Personal care packaging market to grow by 5.5% annually through to 2019, predicts PMMI

Egypt leaves a week full of holidays behind