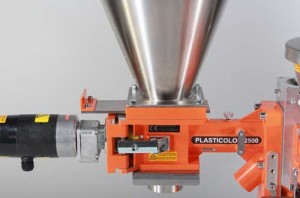 At K 2016, Woywod Kunststoffmaschinen GmbH &amp; Co. Vertriebs-KG will introduce a new 4L weighing hopper (TRW 4L) for the processing of quantities up to approximately 80kg/h.

This new compact and low cost weighing hopper is in addition to the already existing weighing hoppers and “loss-in-weight” systems. This unit is designed for granular, free flowing materials and regrinds and can be used in all areas of the plastic processing .

The newly developed weighing hopper fits with its PLASTICOLOR modular system, like all other pieces of the equipment.

In combination with its PLASTICOLOR 1500 dosing unit, these hoppers can be used as gravimetric single dosing unit or in color change systems. The weighing hopper is positioned on a slanted extension in order to avoid collision with the main material hopper. Thus these two components make up a perfect unit for capacities up to 80L/h. Also extremely small quantities can be dosed in gravimetric operation.

They can also be used as PLASTICOLOR gravimetric throughput measurement system/extruder regulation, for instance, for small extrusion lines or laboratory lines.