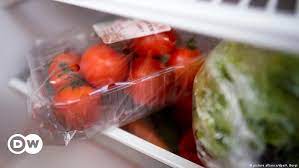 Plastic bags will soon be banned in Germany. But plastic wrap material will still be required for packaging. However, the industry is currently grappling with supply problems owing to a lack of raw materials.

The coronavirus pandemic has shown all too clearly how vulnerable global supply chains are. Even the production of such simple things as plastic wrap for meat and cheese in supermarkets has been affected as it is a product involving global cooperation. Most small and medium-sized companies active in the German plastics packaging sector depend heavily on intermediate products to make plastic wrap.

Among these intermediate products is naphta, a byproduct of fuel that is processed in steam cracker facilities. This means that oil and chemicals companies operating in Saudi Arabia, the US, China and Europe play a crucial role before clingfilm producers can even start doing their job.

Right now, there are many bottlenecks. An IK survey compiled in early March saw three-quarters of the firms polled complaining about insufficient materials supply.

Some 80% of respondents said their delivery schedules were affected and expected the situation to be stagnant or even get worse in the weeks ahead.

“It’s still very difficult to get the raw materials we need — and if we get them, they’re extremely expensive,” Hancker told DW.

In the first three months of the year, prices in Germany for crucial plastics for the packaging industry exploded. Polyethylene prices soared by over 35%, while other synthetics such as polyurethane saw a 50% price hike in the second half of last year.

This has no doubt impacted producers’ profit margins. “However, most of them would be glad if they could just get enough raw materials to meet customer demand,” Hancker said.

Some firms have had to slow down their production over a lack of components such as PVC shrink wraps. Others have pondered switching to alternative materials, but that’s quite a challenge as there’s a magnitude of regulations to adhere to in food packaging.

But how did this scarcity come about in the first place? Hancker puts the dilemma down to the coronavirus pandemic which she says has jolted the global economy and supply chains. Start with the shipping sector. Cargo vessels used to sit in ports with nothing to do, and then prices for containers exploded. Additionally, since a major economic slump was on the horizon, many raw materials producers decided now was the time to work on or retool their plants.

“Such maintenance work needs to be planned half a year in advance,” Hancker argued, adding that maintenance itself could take several months as facilities could not be shut down or restarted overnight.

Force majeure production stoppages were an added irritation, caused for instance by winter storms in the US. Some 80% of German firms said in March they had been affected by such force majeure events.

One of those incidents was the recent Suez Canal blockage caused by the Ever Given that exerted additional pressure on global supply chains. Demand rose faster than expected while intermediate products were increasingly missing.

Hancker also pointed to the fast economic recovery in China. “Markets are booming there, absorbing raw materials in large quantities,” she said. In Germany, she added, the car and construction industries were the main drivers of rising demand.

While there are not enough materials to make sufficient food packaging at the moment, the medical sector is also facing bottlenecks.

Companies are having enormous difficulty getting enough expanded polystyrene, which among other things is the material needed to protect and cool coronavirus vaccine doses during transportation.

Hancker said it would take some time to effectively ease the supply situation. “Most of our IK members don’t expect things to improve considerably before the fall.”

Sacmi to stage an OPERA at the Djazagro fair in Algiers