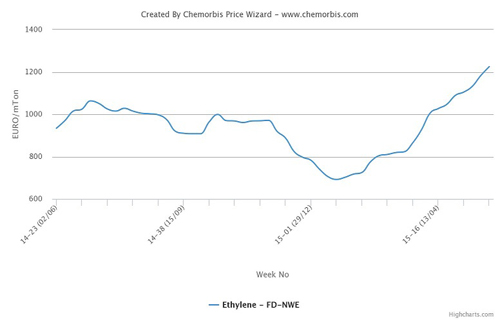 According to ChemOrbis, spot ethylene prices have surged in Europe at the end of last week on the back of production outages across several crackers, which led to force majeure declarations on ethylene supply in some cases ahead of the June monomer settlements.

Spot ethylene prices recorded large increases of around €95-100/ton during the past week to exceed the €1200/ton threshold on an FD NWE basis. Following their recent gains, spot prices have hit the highest level in a year.

Shell has declared force majeure at their Wesseling cracker in Germany following a fire on May 13. The cracker is able to produce around 300,000 tons/year of ethylene.

Naphtachimie also declared force majeure on their ethylene supply from Lavera, France after a fire broke out on May 17. The outage at the 775,000 tons/year resulted in force majeure declarations at PP, HDPE and PVC plants located at the same site.

BP Refining & Petrochemicals’ (BPRP) Olefins 3 cracker at Gelsenkirchen, Germany is offline, market sources reported on May 22. The cracker is expected to stay shut slighty longer than planned after experiencing technical issues during the restart phase.

These production issues have led to firmer expectations regarding the upcoming ethylene contracts, according to ChemOrbis. A few distributors in Italy reported hearing talks of €30-50/ton increases for the awaited June settlements for ethylene.