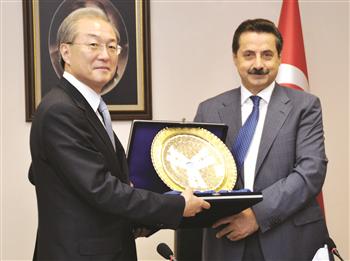 According to the official gazette, the Turkish Parliament issued a law as of January 24 that they found the internal approval procedure conducted by the Ministry of Economy for the free trade agreement (FTA) signed with South Korea on August 1, 2012 appropriate. A source at Turkey’s Ministry of Economy told ChemOrbis that this approval procedure has been completed and accepted by the Turkish Parliament; however, it has to be brought to the agenda of the cabinet and accepted so that it becomes officially fulfilled.

When asked about how long this process may take, the source said, “The ministry is doing its best to speed up the process as the agreement was signed in August and accepted by the parliament in less than five months. However, we do not have an exact idea how long it may really take in practice.”In the last stage, Turkey and South Korea will notify each other that they have completed their internal approval procedures. When both parties submit their notifications, the free trade agreement will be officially effective as of the first day two months following the notification. “In this sense, if the latest notification was placed by one of the parties in February, it would officially take effect on April 1,” the source explained.
On the South Korean side, the internal procedure has already been completed and accepted by their national assembly, although they haven’t notified the Turkish side yet, the source also informed.When this agreement becomes officially in force, customs duties on LLDPE, HDPE, EVA, PP copolymer, EPS, PS, ABS and PET imports will be eliminated between the two countries. Customs duties on LDPE, homo PP and PVC will be cut by a ratio of one to six from the current 6.5% duty and will continue to be lowered by the same amount on January 1 of the following six years. Duties on these products are expected to be completely lifted on the sixth year after the implementation of the agreement.
Players in Turkey have been closely monitoring this process for the FTA as the elimination of the duties will provide considerable competitive power to South Korean cargoes. According to ChemOrbis Import Statistics, total imports of more than 140,000 tons of South Korean materials were made in the first eleven months of 2012 for PP, PVC, PE, PS, ABS and PET while the country imported more than 157,000 tons in 2011. South Korea constituted approximately 3.5-3.8% of the total imports of Turkey in 2011 and 2012 while their share in Turkey’s total imports is expected to grow larger in 2013 along with the implementation of the FTA.
A couple of sources opined, “When the duties are removed, South Korean PP copolymers and HDPE pipe will have a noticeable advantage.” Import statistics also reveal that South Korea has already been an important source of supply for PP copolymers, being the second largest import source for Turkey in the first eleven months of 2012 despite the 6.5% duty currently in place for developed countries. South Korea has also been a crucial supplier for ABS to Turkey with a 6.5% customs duty as 50% of the total ABS imports have been made from this country within the same time frame.
Along with the growing domestic capacities inside China, South Korea has been trying to move away from China and look for other destinations for their exports for several years. In an effort to create new markets, the country signed several agreements with countries in different regions. South Korea and India had the Comprehensive Economic Partnership Agreement (CEPA) with an entry in force in 2010. A free trade agreement with the European Union also took effect on July 1, 2011 and this was followed by the US-South Korea FTA with an entry into force on March 15, 2012.