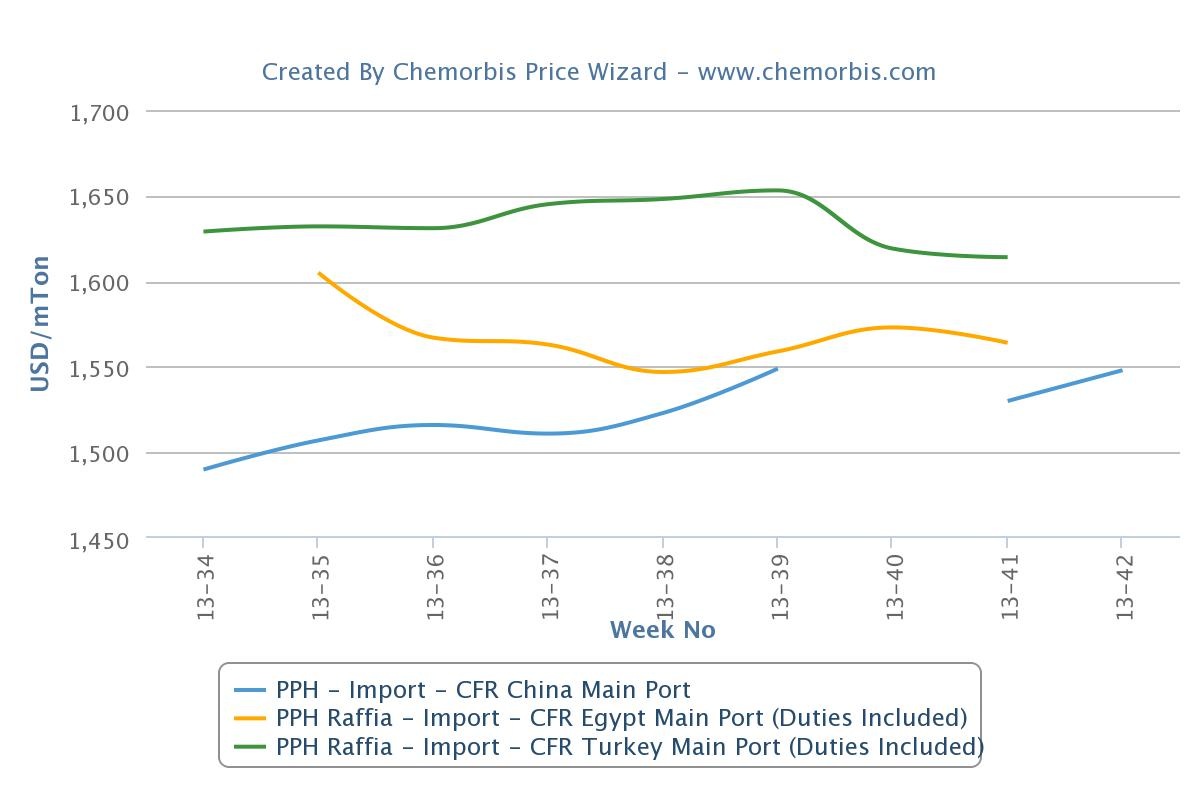 Due to a Muslim holiday celebrated last week, players were away from the market in Turkey and in Egypt during the whole of last week.

In the Turkish PP market prior to the holiday, buyers were sidelined due to a softening trend in prices as per the pricing service of ChemOrbis. Import prices were lower and a price cut from the domestic producer, Petkim, affirmed the trend when they dropped their homo-PP prices by $25/ton on October 8th. The high end of the local range offered by distributors followed suit with a $50/ton decrease on the high end of the price range.

A converter had commented before the holiday, “We will not accept the lower import prices because we can easily find the same price in the local market.” Buyers generally were expecting softer prices upon their return from holiday because of demand conditions, sufficient inventories and the disruption from holidays. On the other hand, the premium that Turkey normally carried over the Chinese market was dwindling based on Middle Eastern offers to both countries.

In the Egyptian market, import PP prices had seen some slight softening just prior to the holiday in response to the lethargic demand ahead of the Eid holiday. In the local market, the high end of the overall price range witnessed some decreases, while the low end was firm. The domestic producer, EPPC, was said to be absent from the market with only notional levels talked amongst players.

In the Chinese market, while players were away in the Mediterranean, PP prices firmed up. This was partly due to Typhoon Fotow which struck areas of Yuyao and Ningbo in eastern China, flooding some warehouses containing polymers. A trader in Cixi said last week, “Some materials in the warehouses, especially those packed in paper bags, were soaked by the heavy rains and flooding and are now unable to meet quality requirements. We believe that the resulting tightness in supply will push prices higher over the short term.”

In the domestic market a distributor reported last week, “We received offers from major producers with rollovers to CNY200/ton ($33/ton) hikes. We are unwilling to restock in large volumes as local prices have risen to hit their highest levels for the past year.” Another seller in Ningbo said, “Lower-cost materials are disappearing from the market as sellers are taking a stronger stance on their prices. We expect prices to remain firm over the short term.”

On Thursday, a source at a South Korean producer reported, “We raised our homo-PP offers for November shipment by $20/ton compared to our October offers and concluded some deals with increases of $15/ton compared to done deals for this month.”

Despite the firming trend, many sellers in and around China commented that they would be looking to sell aggressively to take advantage of the current firmness, particularly as they are not certain about its sustainability.

Meanwhile, downward pressure remains on Turkey and Egypt from the European side where PP prices have dropped this month on lower costs, according to ChemOrbis. Italian players reported further decreases last week due to stagnant demand and soft upstream costs. Sellers reported giving additional discounts due to their inability to conclude deals. October deals for PP have been concluded in Italy with decreases of €40-80/ton from September.