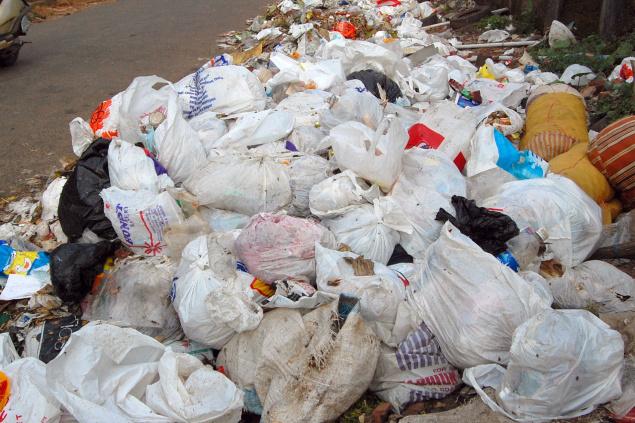 “At the behest of the environment department , the Tamil Nadu Pollution Control Board has come out with a draft bill. It is being reviewed by the government. Recycling of plastic will be strictly regulated in future,” said a senior government official . In an effort to get rid of plastic waste, the state even encouraged use of plastic waste to lay 450km of roads last year.

But regulations have hardly helped, say environmentalists . They say banned plastic bags continue to flood markets. The ban is effective in very few districts like Nilgiris and Kanyakumari , they said. “Hotels and shops continue to use throwaway plastic that is banned. Inefficient solid waste management leads to cattle eating trash, including plastic waste,” said A Narayanan, a social activist , who moved the Madras high court in 2009 against the menace.

Interestingly, the AIADMK government, in its previous tenure, made an attempt to bring a similar legislation , but shelved it soon after. Tamil Nadu Plastic Manufacturers’ Association president S Ganesh said the government need not change the rules. It should maintain uniformity with other states. “The problem of plastics can be solved at the handling stage itself , but we do not do that,” he said.
At least 4,000 tonnes of carry bags and throwaway plastics are manufactured in the state. A notification issued by the Union ministry of environment and forests in 2011 banned use of plastic sachets for storing, packing or selling tobacco and pan masala.
“Rules are never implemented . Unlike tourist spots like Ooty or Mammallapuram, plastic carry bags with less than 15 or 20 microns are freely available in the market,” said V Srinivasan of Save Pallikaranai Marshland movement.

Author plasticsinfomart 15
A development project to recycle polypropylene as food grade packaging has been started by the government-funded recycling agency WRAP. Polypropylene makes up a significant...
Read More

Author Plastics Infomart 95
At this year’s formnext in Frankfurt AM Solutions – 3D post processing technology is presenting not one but three trend setting machines. The new...
Read More