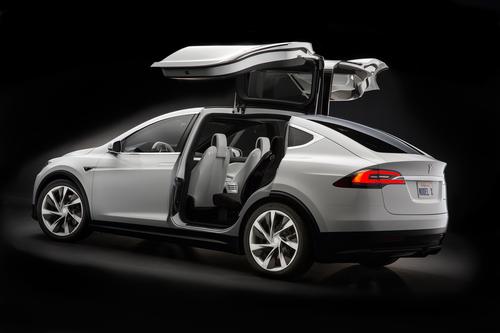 Tesla Motors will blend the qualities of a sport utility vehicle and a minivan in an all-electric car that’s targeted to hit the streets in 2014. Known as the Model X, the new vehicle will seat seven, offer a 17-inch touchscreen in the front seat, and feature “falcon wing” doors that enable passengers to easily walk into the vehicle. A concept version of the Model X appeared at the North American International Auto Show in Detroit last week.

“Tesla is all about clever solutions,” Tesla designer Andre Franco told Design News. “We look at the market and try to find ways to improve on what’s already there.” For now, Tesla is saying little about the vehicle’s technical specifications. Driving range is as yet unknown, but the Model X will offer a lithium-ion battery pack, sized between 60 kWh and 85 kWh. By comparison, the Tesla Model S that came out in 2012 offered a 60-kWh battery with a 208-mile (EPA) range, and an 85-kWh battery with a 265-mile range. The proposed Model X is expected to offer a range somewhere between those two.

The Model X will also offer optional all-wheel drive, which the company says will boost torque by 50 percent. Featuring an additional electric motor-gearbox package about the size of a duffel bag between the rear wheels, the all-wheel-drive version of the X will reportedly accelerate from 0 mph to 60 mph in under five seconds, which would place it among the fastest SUVs on the market.

The new vehicle’s most unusual feature, however, may be its availability of so-called “falcon wing” side doors. Using a hinge between the glass roof panel and the side door, the falcon wing opens upward, without swinging outward. “It’s a re-imagination of the sliding side door on a minivan,” Dustin Krause, regional sales manager of Tesla, told Design News. “With a traditional gull wing door, you wouldn’t be able to park alongside another vehicle because there wouldn’t be room to open the door. This gives you room to enter, without interfering with other vehicles.”

Indeed, Tesla representatives at the show demonstrated how the falcon wing feature allows an adult to stand in the middle row, while offering easy access to the second and third rows of seating. “The intention is not to crawl into a car, but to walk into it,” Franco told us as he stood up inside the car’s open door. “So you don’t have to cantilever yourself to put a child in a car seat.”

At the show, Tesla also showed off a touchscreen that measures 17 inches, diagonally. The touchscreen will serve as a traditional front console display, but is expected to appeal to drivers who are already familiar with touch technology on their phones and tablet computers. If the 17-inch size reaches production, it would be the biggest touchscreen in the auto industry by about five inches. “Touch technology is becoming commonplace, and we thought it needed to be inside our vehicles,” Krause said.

Production is set for 2014 in Tesla’s Fremont, Calif. plant. Pricing is not yet known, but could be in the same range as the Model S. The vehicle is expected to be targeted at buyers of SUV and minivans who are looking to go electric. “This is about taking the flexibility of a minivan and adding a little more flair,” Krause said.