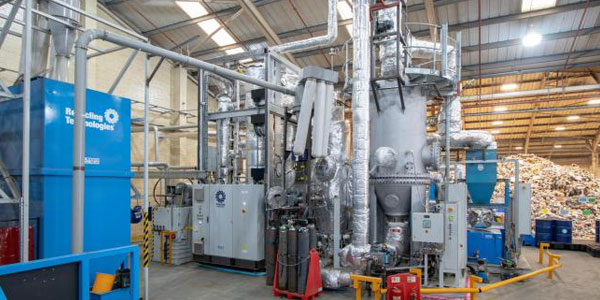 The MP for North Swindon has opened a “headquarters and manufacturing facility” for plastics-to-oil company Recycling Technologies.

Justin Tomlinson, the Conservative MP and a former marketing executive, expressed delight that Swindon is “leading the world” in the development of technology to process waste plastics.

The facility in Stirling Court will be where Recycling Technologies will aim to mass-produce its RT7000 machine, which it claims can turn waste plastics back into a type of oil which can be used to either make new plastic or for use as a fuel.

Jobs
The company claims that around 300 jobs will be created at the 25,000 square foot facility, “creating high value manufacturing jobs in Swindon”. It is also claimed the facility will be capable of the manufacture of 200 of the machines each year, which can then be sold to existing waste management facilities.

This is being done in the hope of “tripling Europe’s current plastic recycling capability by 2027”.

The company currently also has a pilot facility in the council-owned Waterside Park facility in Swindon. In 2019, Recycling Technologies says it is on track to have its first full-scale machine in Perthshire, Scotland, which will be operated as part of a plastics recycling facility on a site owned by the Binn Group.

Commenting on the development, Mr Tomlinson, who is also parliamentary under-secretary of state for family support, housing and child maintenance, said the facility will help the government reach its aims in tackling plastic waste.

“This government has pledged to tackle the scourge of waste plastic and the Chancellor’s recent budget announcement to introduce a tax on plastic packaging with less than 30% recycled content and review of producers’ responsibility will drive additional investment into the UK’s waste plastic recycling industry”, Mr Tomlinson said.

Plans
In terms of funding, the company has raised more than £10 million to develop the technology, spread across seven rounds of crowdfunding as well as from ‘angel’ investors.

Zero Waste Scotland, a Scottish Government-funded body, has also awarded a grant worth approximately £3 million to fund the development of the Perthshire site.

According to Recycling Technologies, the RT7000 machines are “relatively small scale”, allowing them to be located within existing waste management facilities, reducing the financial and environmental costs of transporting residual plastic waste.

He added: “Our manufacturing facility here in Stirling Court, Swindon will be capable of manufacturing 200 RT7000 machines a year to meet the growing demand for plastic recycling capacity in the UK, Europe and the rest of the world.”