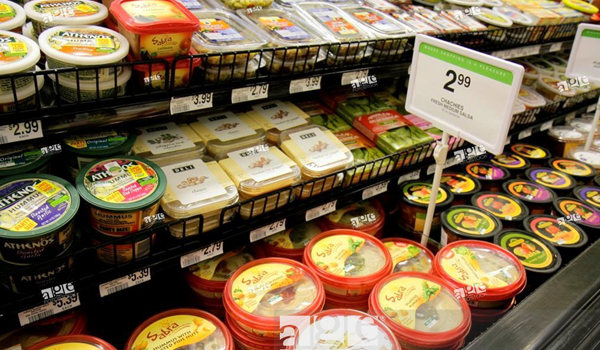 COLES and Woolies are making our lives super easy with readymade meals and handy deals on fruit and veg. But it comes with a cost.

WOOLIES is now selling pre-cut vegetables in a tray, ready to put in the oven. Great if you feel you’re too busy to cut a potato, but maybe not so great for our landfill.

Not only does the product come in a disposable oven tin, it’s wrapped in plastic.

It’s the latest example of over-packaging of our food.

It may be convenient and make busy lives simpler, but the war against plastic-wrapped fresh fruit and vegetables is one being taken on by hundreds of thousands of Aussies who are fed up with excessive packaging on their food.

Almost 400,000 people have signed a change.org petition against unnecessary plastic and hundreds have posted photos on social media using the hashtag #ridiculouspackaging after being urged to by Greenpeace, who also have a petition circling.

“It’s time that supermarkets and producers put an end to smothering their fruit and vegies — and our oceans — in plastic.”

Bourke resident Pat Lowe started the Change.org petition, and recently updated his supporters saying they were making headway, with Woolworths and Coles promising to reduce their plastic.

“Woolworths and Coles have removed tonnes of plastic packaging in the last few months — by June 30, Woolworths will have REDcycle bins in every store,” Mr Lowe told his supporters.

“Coles will have them available in almost 800 stores Australia-wide.

“This means we can recycle plastics right there, in store.

“This victory is one that requires vigilance, so please don’t stop looking out for ways in which these supermarket giants can be more environmentally friendly and if you see something, message Woolworths and Coles directly to remind them of their promise.”

Ashleigh Mills, from Sydney’s northern beaches, signed the petition and said she was very passionate about the issue.

“We should be doing everything in our power to use as little plastic as possible, and seeing so much unnecessarily covering our fresh fruits and vegies is really upsetting,” she told news.com.au.

“Supermarkets are in a unique position where they can be leaders in reducing plastic waste, by stopping single-use plastic and wrapping up small items of fruit and vegies individually.

“Sadly it appears that this is getting more frequent when it should be reducing.

“Banning plastic bags is only the tip of the iceberg.

“It’s got to stop — we need to come together as a community to make sure of that.”

A Woolworths spokesman told news.com.au that while phasing out plastic bags from June 20 was a “big step forward”, they acknowledged there was much more work to be done.

“In recent months we have permanently removed plastic wrapping from produce lines such as avocado, organic spring onions, celery, kale and English spinach,” he said.

“These moves will help save more than 37 tonnes of plastic packaging on a yearly basis and we have plans to do even more throughout 2018.

“We’re also working to roll out convenient plastic recycling options for our customers in all supermarkets across the country by June 30 in partnership with the REDcycle program — a closed loop recycling solution where customers can return soft plastics used to package produce and groceries.”

“We are also actively working with our suppliers on more sustainable and recyclable forms of packaging across all products,” he said.

“There are times when packaging is required to protect the product’s freshness and to ensure food safety from farm to home.